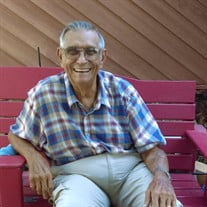 Willie “Bill” Flynn Brumley Jr,85, passed away surrounded by his family at Freeman Hospital on Thursday, April 8,2021. Bill was born on February 18, 1936 to Willie and Mary Jane (Cole) Brumley in Miami, Oklahoma. Bill graduated from Miami High School in 1954 and then enlisted in the United States Air Force in January of 1955. On July 3, 1955 he married the love of his life, Margie Lee Simpson. Upon his Honorable Discharge from the Air Force in January of 1959, Bill, Margie, and their daughter Deanna relocated back to the Commerce/Miami area. Bill loved to go fishing especially with his wife Margie on their pontoon boat. He also enjoyed hunting with his sons and the annual pheasant hunting trip with members of his Picher Church of the Nazarene men. Bill loved to attend his children, grandchildren, and great grand children’s athletic events. He was a supporter of Commerce High School football games and he often showed his support by yelling” GO BIG BLUE”. Bill and Margie enjoyed traveling. He was a member of the Commerce Masonic Lodge & Picher Lions Club. He served as N.A.P.U.S., state president. The North Miami Community Center Was named in his honor. He was a member of the Picher Church of the Nazarene and the New Life Nazarene Church in Miami, Oklahoma where he served on various boards. Bill started in the postal service as a mail carrier and served as a Post Master at Cardin, Picher, and retired at Commerce. He was also a member of the Sooner Pride Committee, as well as treasurer for the town of North Miami. To his family and to those that knew him, he was a man of his word and did everything he said he was going to do. Bill’s priorities in life were first his Faith, God, and his family. Mr. Brumley is preceded in passing by his parents Flynn and Mary Jane Brumley and brother Lonnie James Brumley Those left to share his legacy are wife Margie of the home, children Deanna Johnson and husband Rick, Warren Brumley and wife Cathy, and Phillip Brumley, grandchildren Aaron Johnson and wife Kristen, Leslie Hills and husband Randy, Tressa Rosas and husband Ivan, Taylor Rhodes and husband Logan, great grandchildren Xavier, Xander, Emerson, Everly, Ezekiel. Visitation Will be Sunday, April 11, 2021 from 5:00 PM until 7:00 PM at Brown-Winters Funeral Home and Cremation Service in Miami. Graveside Services are on Monday, April 12, 2021 at 3:00 PM at Grand Army of the Republic Cemetery in Miami with Reverend Casey Hollingsworth officiating. Friends and family may send the family notes of encouragement by viewing Mr. Brumley's Tribute Page at www.brown-winters.com.

The family of Willie "Bill" Flynn Brumley Jr. created this Life Tributes page to make it easy to share your memories.

Send flowers to the Brumley family.