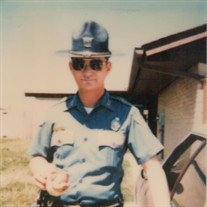 William "Bill" Glenn Crossley Jr., 76, a resident of Miami, Oklahoma passed away at Freeman Health System in Joplin, Missouri on Sunday, August 15, 2021. Mr. Crossley was born on December 5, 1944 in Selma, Alabama to William G. Crossley Sr. and Flora (Bierd) Crossley. Bill was an Army Ranger while he served in the United States Army. He followed that with a storied career in law enforcement. He worked as a Deputy for Ottawa County Sherriff, he was the Chief of Police in Afton, and he then became an Oklahoma Highway Patrol Trooper, before working for a few years in Alabama working as a detective. Bill and his wife were members of Southern Hills Baptist Church in Miami. Bill was also a member of the Masonic Lodge in Afton and the Craig County Shriners. Mr. Crossley was preceded in passing by his parents, William and Flora Crossley, and a sister Sarah Little. Those who will share Bill’s memories are his wife Sylvia (Threlfall) Crossley, his sons William N. Crossley and his wife Melissa of St. Petersburg, Florida, Mike Johnson and his wife Ann of Birmingham, Alabama, his daughter Kathi Johnson of Vinita, Oklahoma, a brother Joseph Crossley and his wife Barbara, a sister Rebecca Donatelli and her husband Tony of Gilbert, Arizona, his grandchildren Samantha Wiginton, Matthew Johnson, Ryne Johnson, Heather Farley, Kyle Crossley, Bethany Edwards and Conner Glenn along with great grandchildren Lyrik Wiginton, William Wiginton, Lillie Farley, Aubrey Farley, Jackson Crossley, Ashton Crossley and Luca Edwards. Bill's Wishes were to be cremated. Cremation Services have been entrusted to Brown-Winters Funeral Home and Cremation Service. Friends and family may send the family notes of encouragement by viewing Mr. Crossley's Tribute Page at www.brown-winters.com.

The family of William Glenn Crossley Jr. created this Life Tributes page to make it easy to share your memories.

Send flowers to the Crossley family.