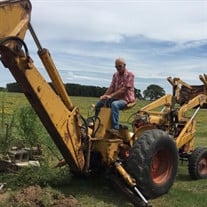 Wiley Ernest Cox, 84, a lifetime Fairland resident passed away at his home on February 27, 2022. Mr. Cox was born on March 27, 1937 in Fairland to Ernest Franklin “Jay” and Mary Eliza (Blalock) Cox. On June 30, 1956 in Fairland Wiley married his love, Oma Bennett. Wiley started his career as a Heavy Equipment Operator, he could do about anything with the equipment he was working with. He spent many years laying water and sewer lines. Wiley was also a great mechanic. Could fix anything he put his hands to and sometimes even over the phone to his children. Wiley according to his family had a need for speed. Above all else Wiley loved his family and enjoyed teasing with the folks he came across. Mr. Cox was preceded in passing by his parents Jay and Mary Eliza Cox, his siblings Betty Ridenhour, Doris Dean Cox, Floyd Cox, Lloyd Cox, Jim Cox, Tom Cox, Johnny Cox and Larry Cox along with a son-in-law Bradley Kamolz. Survivors include his wife of sixty-five years Oma Cox of the home, his children Joyce Golden and James Oakley of Fairland, Mike Cox and his wife Denice of Fairland, Judy Upton and her husband Dale of Oklahoma City, Laura Cox and Samuel Cox of the home, his sisters Lilly Loehr and Mary Woods, his grandchildren Jason Golden and his wife Erica Woodward, Justin Hill of Fairland, Misty Ellison and her husband Marcus, Jerod Hill of Fairland, Kenton Kamolz and his wife Kayla of Woodward, Jacob Kamolz and his wife Sarah of Moore, and Travis Kamolz of Bixby, his great grandchildren Stran Golden, Cooper Ellison, Case Ellison, Breckyn Ellison, Emaline Kamolz, Kade Kamolz, Hannah Kamolz, Weston Kamolz, Anna Kamolz, Kierston Scott and Kase Scott. Also surviving are Bobby Scott and his wife Katrisha whom the family consider to be adopted in the family. There will be come and go viewing from 12 noon until 8:00 PM, on Wednesday, March 2, 2022 at Brown-Winters Funeral Home and Cremation Service in Fairland. Graveside services are 10:00 AM, Thursday, March 3, 2022 at Hickory Grove Cemetery in Grove with Mr. Claude Best officiating. Interment is under the care of Brown-Winters Funeral Home and Cremation Service in Fairland. Friends and family may send the family notes of encouragement by viewing Mr. Cox’s Tribute Page at www.brown-winters.com.

The family of Wiley Ernest Cox created this Life Tributes page to make it easy to share your memories.

Send flowers to the Cox family.