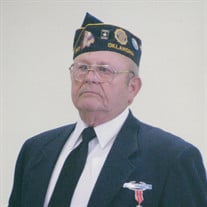 Wayne Lee Dickerson passed away on October 10, 2021 at his home in Miami. He was born on January 9, 1933 in Las Vegas, Nevada to Violet Morris Dickerson and Claude Dickerson. He grew up in Commerce and Picher area graduating in 1950 from Picher High School. He was activated in the 45th Infantry Division (Thunderbirds) in September 1950 and served until July 1952 in the Korean War Conflict. He rejoins the National Guard after his return home and commanded the Miami and Vinita units from 1955 to 1962 retiring as Captain. In 1961 and 1962 he was selected as a member of the Oklahoma State Rifle team competing at Camp Perry, Ohio winning several gold, silver, and bronze medals. After serving in Korea he attended NEO subsequently going to work for B. F. Goodrich plant until 1986 retiring as Foreman in the OTR Tire Department. He entered the nursing program at NEO for one year and returned to the work force as a mental health aide and Training Specialist at Eastern State Hospital in Vinita until his retirement in 1998. He is survived by his wife of 68 years, Twila, a daughter Susan Alsbury and husband Lee, a grandson Cade Alsbury and wife Amber, and a great granddaughter Harper Alsbury and a number of cousins. Preceding him in death were his parents, Violet and Claude Dickerson, and two brothers, Raymond and Robert Dickerson. He was a member of Immanuel Lutheran Church, Grove, Oklahoma and the American Legion Funeral and Flag Detail in Miami. For over 40 years he was a member of the Mt. Olive Lutheran Church serving in most offices and capacities, Hearts and Hammers Projects, Thrivent Financial fund raising projects for the community including the Coleman Theatre restoration, the Veterans Memorial at the Courthouse and the homeless shelter. Visitation will be held at Brown-Winters Funeral Home and Cremation Service in Miami on Wednesday, October 13, 2021, from 6-8PM. Funeral will be held Thursday, October 14, 2021, at Mount Olive Lutheran Church in Miami, Oklahoma at 10:00 AM with Rev. Todd Harrson officiating. Pall bearers will be Curtis Schroeder, Brad King, John Procter, Herbert Morris, Lee Alsbury and Cade Alsbury. Military rites by American Legion Post #147 In lieu of flowers memorials may be made to Immanuel Lutheran Church, 706 Rockwood Drive, Grove, Oklahoma, 74344 or a charity of your choice.

Wayne Lee Dickerson passed away on October 10, 2021 at his home in Miami. He was born on January 9, 1933 in Las Vegas, Nevada to Violet Morris Dickerson and Claude Dickerson. He grew up in Commerce and Picher area graduating in 1950 from Picher... View Obituary & Service Information

The family of Wayne Lee Dickerson created this Life Tributes page to make it easy to share your memories.

Send flowers to the Dickerson family.