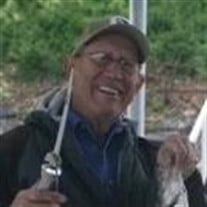 Wallace Ray Madison, 85, a resident of Grove, Oklahoma passed away at home on Sunday, January 9, 2022. Mr. Madison was born on October 10, 1936, in Tulsa, Oklahoma to James Earnest and Rena Roxie Anna (Baxter) Madison. He graduated high school in Noel, Missouri. He received college at Ozark College in Missouri. On July 19, 1957, he married the love of his life Phyllis Jean Coker. He worked in information Technology for Phillips Petroleum for thirty-six years. Wally and Phyllis were members of the First Assembly of God in Fairland. He was a member of the Collie Club of America and at one time served as their president. Mr. Madison enjoyed his family and could often be found fishing. Wally as he was commonly known, was preceded in passing by his parents James and Rena Madison his sisters Wanda Faye Duncan, and Glenna Ruth Madison, along with a brother Robert G. Madison. Survivors include his wife of sixty-four years Phyllis Madison of the home, his daughters Terri Lynn Hester and her husband John of Bartlesville, Brenda Kay Lairson and her husband Buddy of Grove and one son James Douglas Madison of Nowata, his grandchildren Nikki Jo Lairson of Oklahoma City, Aundi Marie Wade and her husband Bobby, of Bartlesville, Daniel W. Lairson and his wife Aja, of Miami, Drew Hester of Bartlesville, Elisha Madison and Joshua Madison, Stephanie and her husband Scott Perry of Kentucky. He is also survived by a host of Great Grandchildren. Services will be 2:00 PM on Wednesday, January 19, 2022, at First Assembly of God in Fairland with Reverend Jackie Crafton officiating. At the family’s request there will be no meal before or after the service due to the pandemic. Services have been placed under the care of Brown-Winters Funeral Home and Cremation Service in Miami. Mr. Madison ask that memorial contributions be made to St. Jude’s Children’s Hospital. Friends and family may send the family notes of encouragement by viewing Mr. Madison’s Tribute Page at www.brown-winters.com.

The family of Wallace Ray Madison created this Life Tributes page to make it easy to share your memories.

Send flowers to the Madison family.