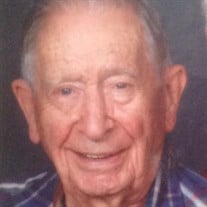 Vern Dressler Montgomery, 96, of Fairland, OK, passed away in Miami, OK, on June 15, 2020. He was the only son of Ralph and Okah (Boren) Montgomery and was born on January 10, 1924, at home in Fairland. His parents and older sister, Mabel Montgomery Williston; his wife, Jo Montgomery, and his younger son, Robert Jonathon Montgomery of Canton, GA, precede him in death. He is survived by his son: Larry (Joyce) Montgomery of Wichita, KS, his daughters; Jamie (Donald) Maymon of Brooksville, FL, and Pamela (John) Hedden of Pimento, IN, and his sister, Madaleen Montgomery Miller of Fairland, OK. He is also survived by 13 grandchildren and 19 great grandchildren. He graduated from Fairland High school Saturday, May 25, 1941 and promptly joined the service. He was a member of the 64th troop carrier group, 35th squadron Army Air Corps WWII. He was stationed in Italy, flying in a troop transport squadron. While he was there he lived with an Italian family that he remembered fondly for the rest of his life. Certain Italian words crept into his vocabulary and he would often call his wife Josapina. When Vern returned from the war he joined his dad in working at the grain elevator in Fairland for a year or so and then he attended Graceland College in Iowa for a year, where he took accounting classes so that he could continue to be of help in the family business. In 1948, while attending Kansas University, Vern met an attractive young woman from Canada named Josephine Skelton who added him to her calendar as her “dinner date”. She also had a fella who was her “lunch date”. Eventually the other guy was dropped from her calendar. After his 2nd year of college, he returned to Oklahoma and she stayed in the Kansas City area working at Herald House, the church’s publishing house. They exchanged letters for several months before he popped the question and they married in September of 1950 in Independence, MO. Vern and Jo were married for 65 years, raised four children and were a blessing to everyone who knew them. In the early years, Vern worked as an accountant for grain elevators, in Fairland, Ok, Tonganoxie, KS, and Orlando, FL. Later he worked in Pittsburgh and Lawrence, KS, before moving to Terre Haute, IN, in 1963 to work for Central Nitrogen. At that time he held the office of Priest in what is now known as Community of Christ and for many years he led a small group in the Terre Haute area. He was ordained an Elder and later a High Priest as he continued his ministry in the church. He was also involved with the local Optimist Club and the PTA where the children went to school. In the mid 1980’s Vern had a change of vocation and became a journeyman electrician. There was one summer when, being unemployed, he spent the summer working as a volunteer at children and youth camps in Southern Indiana. When he retired from being an electrician, Jo and he enjoyed traveling around Canada and the US. Eventually they became snowbirds, settling down in a little tin house in Apache Junction, AZ, every winter to enjoy some much needed sunshine and relaxation. For several years they traveled back and forth. Vern joked about only needing one sermon a year which he could give at both locations. Vern had many interests and hobbies including gardening, flying a small Moonie airplane, acting at the Community theater in Terre Haute, traveling and writing his memories. For several years he was in charge of the annual reunions for his WWII carrier group. No matter where they lived or what congregation they attended, Vern was involved with ministry; from cooking chili for church suppers, to singing in the choir, to leading a youth group, to handling the church financial books, Vern’s life was filled with service. Vern lived every moment of every day in the conviction of faith in Christ by displaying unwavering kindness and limitless generosity to everyone with whom he came in contact. No matter the circumstances, Vern would always believe that the glass was 3/4 full. Optimism was a guiding principle in his life. He indulged himself with hard work and the fellowship of friends and family. He collected friends everywhere he went, and if you were a friend of Vern’s, it was for life. We are all better people for having known him and he will be sorely missed. We know that Vern lived his life with joy and that he was LOVED. The internment will be private as Vern is laid to rest in the Fairland Cemetery next to his Josephine. Your continued love and support would be appreciated. A memorial will be given in his name to Outreach International. Services were placed in the care of Brown-Winters Funeral Home and Cremation Service in Fairland. Friends and family may send the family notes of encouragement by viewing Mr. Montgomery’s Tribute Page at www.brown-winters.com.

Vern Dressler Montgomery, 96, of Fairland, OK, passed away in Miami, OK, on June 15, 2020. He was the only son of Ralph and Okah (Boren) Montgomery and was born on January 10, 1924, at home in Fairland. His parents and older sister, Mabel Montgomery... View Obituary & Service Information

The family of Vern Dressler Montgomery created this Life Tributes page to make it easy to share your memories.

Vern Dressler Montgomery, 96, of Fairland, OK, passed away in...

Send flowers to the Montgomery family.