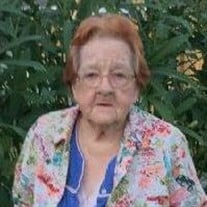 Veda Loretha Burnett, was born at the family home on July 1, 1919 at Reichert, OK. to Margaret Arsula (Britton) Tucker and R.P. (Boss) Tucker. She met her Lord and Savior, Jesus Christ on March 30, 2019 at 8:10 pm at her youngest daughter's home in Miami, OK. She attended most of her young adult life at the Holsom Valley Baptist Church. It's not known the date of her baptism but she was baptized in the cool, clear water of Holsom Creek. She was surrounded by her loving family and friends at the time of her passing. Veda was happy to be going home to her Father, as she had told members of the family that she was ready. During her last sick spell in 2018, Veda told her family not to shed tears for her but if it made them feel better it was OK by her. Veda was to come back from near death several more times. She could be stubborn and strong-willed at times. That was significant of the times in which she was born and lived. Times were hard when she grew up. She lived through The Great Depression. The folks of that time were a true salt of the earth type of people. She was a great example of those people and would help those she felt needed help and no matter what happens, never give up. Her mother, Margaret Britton, was a lovely Choctaw and her father, Boss Tucker, was a red-headed Irishman with the temper and love of the drink. To let you know how tough he was, he boot-legged whiskey as a young man. He rode and picnicked with the likes of Bell Star and the James boys at Robbers Cave near Wilburton, OK. Veda loved to play basketball was known to be quick and "scrappy". Picture this: her uniform differed from those of today; the bottoms were knee length with elastic around the bottom. Believe it or not; they played outside on dirt and they played half court. For those of you who don't know about half court, the guards played on one end and the forwards on the other. As a girl still living at home she rode a horse named "Old Brock". She preferred being outside instead of helping inside the house. She has always had a genuine love of animals. Against her father's wishes she met and married Cecil (Snooks) Bowman in 1937. He played guitar with her brother Hershel in a band. She was at a dance the boys were playing at and she loved to dance. That's when Snooks noticed her. In fact, Veda danced her entire life. Veda picked cotton to buy her dress to get married in. It was a smart looking street dress of the times and cost 48 cents. Her Grandma Britton bought her new sandals for about a quarter. She must have been on cloud nine. She lived most of her adult life in Holsom Valley and raised her family. There are two daughters; Charlene and Deloris. Snooks worked for the forest service and other odd jobs while Veda took care of the cattle. It was open range and she was admired by many at how pretty and fat her cows were and they all had a name. She was courageous and brave. When her parents lived at Dunbar, Okla.; Snooks would take her and the girls to Talihina to catch the train to Dunbar, then walk to the edge of the Kiamichi River to climb into a small wooden boat and cross the river to her parents property and then walk to their house. It was quite a treacherous journey for a young mother and two small girls. As the girls started to grow up and the range closed, the couple and Deloris moved to Summerfield, Okla. Snooks and Veda went their separate ways in about 1965. Veda moved to California and married Alec Burnett, a man who also grew up near Summerfield. He had been in the Navy and worked in the ship yards in San Diego, CA. They made a home for Deloris and themselves in Shafter, CA. The couple worked in the grape vineyards, pruning grapes. Veda didn't care for the intense heat and became a homemaker. After about 10 years, the couple moved to Wilburton, OK and then Talihina, OK where they raised fighting chickens. The pair was well known around the fighting pits and known for winning. In fact, they were able to pay for the home and ten acres from the sale and winnings of Veda's fighting roosters. As the couple began to age they retired from the hustle and bustle of the fighting roosters. Soon Alec's health began to fail and they moved near Deloris in Miami, OK. Alec passed away after 30 good years of marriage. Veda resided in Miami until her death. She is survived by two daughters: Charlene Hollan of Colony, OK and Deloris Phillips of Miami, OK-- four grandchildren :Marquetta Hollan of Colony,OK and Marty and Beth Hollan of Colony, OK - John and Laura Hensley of Vinita, OK and Sharon Comstock of Wichita, KS -- five great-grandchildren: Clay Humbargar of Seminole, TX, Chance Isaak of Colony, OK, Dawnel Snider of Clinton, OK, Ashley Horner of Vinita, OK and Emily Horton of Miami, OK and 11 great-great grandchildren. Graveside services will be Monday, April 1, 2019 at 2:00 PM at Grand Army of the Republic Cemetery in Miami. Services are placed under the care of Brown-Winters Funeral Home and Cremation Service in Miami. Friends and family may send the family notes of encouragement by viewing Veda's Tribute Page at www.brown-winters.com.

Veda Loretha Burnett, was born at the family home on July 1, 1919 at Reichert, OK. to Margaret Arsula (Britton) Tucker and R.P. (Boss) Tucker. She met her Lord and Savior, Jesus Christ on March 30, 2019 at 8:10 pm at her youngest daughter's... View Obituary & Service Information

The family of Veda Burnett created this Life Tributes page to make it easy to share your memories.

Veda Loretha Burnett, was born at the family home on July 1,...

Send flowers to the Burnett family.