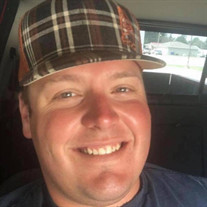 Tyler Joe Vincent, 30, a longtime Fairland Resident passed away on Saturday, June 29, 2019 in Fairland. Tyler was born on February 28, 1989 in Miami to Terry J. and Kelly Ann Vincent. He graduated from Fairland High School with the Class of 2008. He completed his education at Northeast Vo-Tech Center in Afton where he studied Welding. One week after graduation he started his dream of becoming a welder working on the road for the past 11 years as a pipeline welder. He was a member of the 798 Pipeliner’s Union out of Tulsa, Oklahoma. Tyler was an avid hunter and fisherman. Tyler enjoyed being Uncle Ty Ty, and loved to spend time with his nieces and nephews when he was home for visits. He was a good cook and enjoyed collecting and trading guns. He above all was a loyal, trustworthy friend. Those left to share Tyler’s memories are his parents Terry and Kelly Vincent of Fairland, his brothers David and his wife Kristen of Florida, Matthew and his wife Shelly of Florida and Timothy and his wife Danielle of Boston, his sister Kelsey J. Vincent of Fairland, his nieces and nephews Shawn, Justin, Aliesha, Ryan, Brody and Kezlee and his paternal grandmother Kay Vincent and maternal grandmother Jackie Cooper. Also surviving are his Welding Brothers and many friends. He is proceeded in death by his paternal grandfather Ron Vincent and a cousin Joshua Cox. Honorary Pall Bearers are Justin Hill, Newt Turner, John Looper, Jaycee Calan, Kelby & Cody Allman, Richard Clapp, Cody Oleman, Will Sampson Sr., Jason Chastain, Aaron Turner, Mark Bryant, and the Brotherhood of Welders. Visitation will be Friday, July 5, 2019 at Brown-Winters Funeral Home and Cremation Service in Fairland from 6:00 PM until 8:00 PM. Services are 10:00 AM on Saturday, July 6, 2019 at Fairland Public School Gymnasium with Mr. Joe Clapp officiating. In lieu of flowers an account has been set up at First National Bank in Fairland for a Tyler Joe Vincent Welding Scholarship for Vo-Tech Students. Friends and family may send the family notes of encouragement by viewing Mr. Vincent’s Tribute Page at www.brown-winters.com.

Tyler Joe Vincent, 30, a longtime Fairland Resident passed away on Saturday, June 29, 2019 in Fairland. Tyler was born on February 28, 1989 in Miami to Terry J. and Kelly Ann Vincent. He graduated from Fairland High School with the Class of... View Obituary & Service Information

The family of Tyler Joe Vincent created this Life Tributes page to make it easy to share your memories.

Send flowers to the Vincent family.