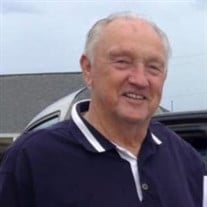 Tom Wesley Housh, 82, a longtime Miami resident passed away at home on Tuesday, April 6, 2021. Mr. Housh’s parents are Lloyd Housh and Esther Ruth (Franklin) Housh. Tom graduated from Bluejacket High School then Northeastern Oklahoma A&M before attaining his Bachelor’s Degree from what is now Pitt State University. Tom’s health administration career spanned from 1970 to 2019. The homes included Heritage, Care, Fairland, Picher, Quapaw Nursing Home Elmview and Leisure Living. He was a Master Mason, was a member of the Shriners and Scottish Rite. He was also a member of the Oklahoma State University Cowboy’s Pilots Club. He had a Cessna and Kris would go flying with him as a kid. Tom was an avid outdoorsman and competitor. He enjoyed playing golf, shooting skeet, hunting, fishing, bowling, playing cards, racing cars, and the list could go on and on. He liked to win. Kris was her dads most expensive birthday present , she was born on his birthday. Mr. Housh’s parents Lloyd and Esther both preceded him in passing. He was also preceded by his son David Housh, a brother Don Housh and two sisters Mary Lou Hopper and Helen Taylor. Survivors include his daughter Kris Housh and her fiancé Travis Burki of the home, his granddaughter Katelin Housh and her fiancé Will Nole of Widby Island, Washington along with his nieces nephews and other relatives and friends. Visitation will be from 6-8PM on Monday, April 12, 2021 at Brown-Winters Funeral Home and Cremation Service in Miami. Funeral Services will be 10:00 AM on Tuesday, April 13, 2021 also at Brown-Winters Funeral Home and Cremation Service in Miami with Reverend Jim Paslay officiating. Interment will follow at the Grand Army of the Republic Cemetery in Miami. Casketbearers will be Troy Wilmoth, Jason Ketcher, Aaron Ketcher, Phil Stafford, David Ketcher and Trenton Burki. The family has asked that in lieu of flowers please make a donation to the Ketcher/Keheely Animal Shelter. Friends and family may send the family notes of encouragement by viewing Mr. Housh's Tribute Page at www.brown-winters.com.

The family of Tom W Housh created this Life Tributes page to make it easy to share your memories.

Tom Wesley Housh, 82, a longtime Miami resident passed away at...

Send flowers to the Housh family.