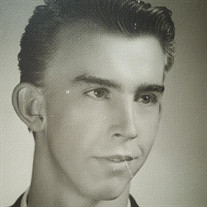 Stanley Sanders, 71, a longtime Fairland resident passed away on Friday, May 1, 2020 at Freeman Health System in Joplin. Stan was born on April 10, 1949 in Fairland, Oklahoma to Eugene Bernard Sanders and Norma Jean (Earls) Sanders. Mr. Sanders was a Veteran of the United States Army. He was a Combat Medic with the 4th Infantry division out of Fort Carson, Colorado. He was deployed over seas as an SP 4 combat medic for three years during the Vietnam War. During his service with the Army, Stan received the National Defense Service medal, the Vietnam Campaign medal w/60 Device, and a Vietnam Service Medal w/2 bronze service stars. Stan made a career as a mechanical contractor and retired from state of Oklahoma. Stan was an avid music lover and played in a few bands in his younger years. Stan loved hunting, spending time with family, and playing guitars. He was also a 32nd Degree Mason with the Scottish Rite Club in Tulsa, Ok. Mr. Sanders was preceded in passing by his parents Eugene Sanders, Norma Jean and JC Johnson, and his sister Brenda K. Johnson. Survivors include his wife Tina Sanders of the home, his children Kim Giles, Derek and his wife Crystal and Danyeal Pryor and her husband Brian, his grandchildren Emilee Giles, Kacen Giles, Canton Giles, Tyler Sanders, Trinity Forbes and Meagan Forbes,and his aunt, Clara May. He also has many extended family members in and around Fairland. For the health, safety, and welfare of family and friends, due to the coronavirus (COVID-19), the family will be having a come and go visitation from 10:00 AM until 7:00 PM at Brown-Winters Funeral Home and Cremation Service in Fairland. His Celebration of Life is on Friday, and will be a private service. Services have been placed in the care of Brown-Winters Funeral Home and Cremation Service in Fairland. Friends and family may send the family notes of encouragement by viewing Mr. Sanders Tribute Page at www.brown-winters.com.

The family of Stanley Sanders created this Life Tributes page to make it easy to share your memories.

Send flowers to the Sanders family.