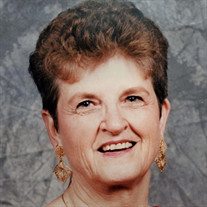 Shirley Jean Tucker, 86, passed away at Higher Call Nursing Center on Wednesday, January 19, 2022. Shirley was born July 10, 1935, in Hominy, Oklahoma, to Floyd Lachenmayr and Eula Ethel (Kirkendall) Lachenmayr. She graduated Valedictorian from Southeast High School in Oklahoma City in 1953. She married her husband, Donald Tucker, on July 20, 1952, in Oklahoma City, Oklahoma. She worked at the Bank of Quapaw for many years, and retired from Eagle Picher Boron. Shirley’s hobbies included painting and crafting, reading, crocheting, and cooking Sunday dinners for family. Most of all, she enjoyed spending time with her family, and her grandchildren brought her tremendous joy. Those left to share Shirley’s memory are her daughters, Sheryl Schulze and her husband Dennis, Charise Mangum and her husband Barry, Tammy Burnett and her husband Randy, and her sister, Sue Ketchum. Shirley also had five grandchildren and eight great grandchildren. She was preceded in death by her parents, Floyd and Ethel Lachenmayr, her husband, Don Tucker, and her sister, Dana Gossman. Shirley’s wishes were to be cremated and her care has been placed in the care of Brown-Winters Funeral Home and Cremation Service in Miami, Oklahoma.

The family of Shirley Jean Tucker created this Life Tributes page to make it easy to share your memories.

Send flowers to the Tucker family.