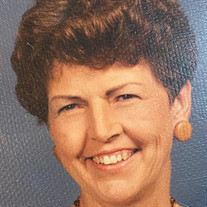 Roxanne Cox, 85, a longtime Fairland resident passed away at her home on Wednesday, April 29, 2020 surrounded by her family. Mrs. Cox was born on January 9, 1935 in Borger, Texas to Toy and Maude (Reich) Wells. Roxanne married Floyd Cox on December 3, 1953 in Miami. She had lived in Phillips, Texas, Afton, Bartlesville, and Tulsa but had made Fairland her home for forty-eight years. She worked as an accountant for the Eastern State Hospital until her retirement in 2001. Mrs. Cox was a member of Fairland First Baptist Church. She was preceded in passing by her parents Toy and Maude Wells, her husband Floyd Cox, a son Pat Cox, a grandson Floyd David Cox, a great grandson Mitchell Coffey, two sisters Hazel McPhearson, Lorene Potts and a brother Clove Arby Wells. Surviving family include her children David Cox and his wife Brenda, Billy Cox and his wife Tammye, Linda Taylor and her husband Randy, a daughter-in-law Linda Cox, her grandchildren Greg Cox and his wife Niovanna, Chris Cox, PJ Cox and his wife Kayla, Amy Dodson and her husband John, April Harrison and her husband Jeremy, Gentry Cox, Lucas Abernathy and his wife Angie, Eliza Galati and her husband Chris, Cody Taylor and his wife Abigail, Jennifer Coffey and Chris Potter, Dustin Cox and his wife Devin and Dallas Cox, along with her thirty-four great grandchildren and eight great-great grandchildren. She is also survived by her nieces, nephews and other relatives and friends. There will be a time of visitation from 1-2PM on Saturday, May 2, 2020 at Mrs. Cox’s Home followed by a Celebration of her life at 2PM officiated by her son Brother Billy Cox. Services have been placed in the care of Brown-Winters Funeral Home and Cremation Service in Fairland. Friends and family may send the family notes of encouragement by viewing Mrs. Cox’s Tribute Page at www.brown-winters.com.

Roxanne Cox, 85, a longtime Fairland resident passed away at her home on Wednesday, April 29, 2020 surrounded by her family. Mrs. Cox was born on January 9, 1935 in Borger, Texas to Toy and Maude (Reich) Wells. Roxanne married Floyd Cox on December... View Obituary & Service Information

The family of Roxanne Marie Cox created this Life Tributes page to make it easy to share your memories.

Roxanne Cox, 85, a longtime Fairland resident passed away at...

Send flowers to the Cox family.