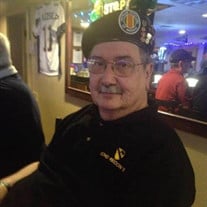 Robert Springer, a long-time resident of Miami, Oklahoma passed away at the age of 70 on Friday, April 21st 2021 at his home in Sun Lakes, Arizona. He was born in Woodriver, Illinois on October 17, 1950 to Everett Wayne and Mary Lou (Grisson) Springer. In Robert’s formative years he lived in several places across our nation, but settled in Miami, Oklahoma after leaving the United States Army. Upon graduating from Lockport Highschool in Lockport, Illinois he served our great nation in the Vietnam War as point man for Echo Recon 1/5 1st Air Cav and gained the rank of Sergeant. His brothers in arms knew him by the name Stallion. Robert held a tremendous love for his country and was a true patriot. In 1986 Robert was instrumental in founding the Vietnam Veterans of America chapter 277 in Miami, Oklahoma. More importantly Robert loved his beautiful wife Janet (whom he married on September 15, 1984 in Chetopa, KS), and his many family members and friends. For those who knew Robert they were well aware of his jovial sense of humor, his calm demeanor, passion for writing, a love for the outdoors and any sport associated with it, and his keen intellect. Robert always had time for a friend and he was respected and adored by many. Robert was preceeded in passing by his parents Everett and Mary Springer, brother Neal Springer, and son Keith Chard. Survivors include his wife Janet Springer, daughter Holly Shepherd, brothers Charles and Wayne Springer, his sister Glenda Compton, his grandchildren, great grandchildren, nephews, nieces, and great nephews and nieces. A celebration of life will be held at a later date at Brown-Winters Funeral in Miami, Oklahoma. Individuals wishing to make donations please consider the Turpentine Creek Wildlife Refuge in Eureka Springs, Arkansas.

Robert Springer, a long-time resident of Miami, Oklahoma passed away at the age of 70 on Friday, April 21st 2021 at his home in Sun Lakes, Arizona. He was born in Woodriver, Illinois on October 17, 1950 to Everett Wayne and Mary Lou (Grisson)... View Obituary & Service Information

The family of Robert Springer created this Life Tributes page to make it easy to share your memories.

Send flowers to the Springer family.