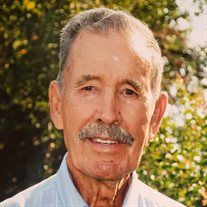 Robert Lewis Cline (Bob) was born April 14, 1929 in Branchville, Maryland, to Raymond and Elsie Cline. He married Juanita Periman June 17, 1951. they were married for 69 years. They began their married life in Michigan where Bob proudly served in the U.S. Navy. After a brief time in Tulsa, they made Miami their hometown where they raised their 4 children. Bob was a retired B.F. Goodrich employee. After retirement is when he began the ‘work’ that brought him pleasure. Fishing and hunting were hobbies that he enjoyed throughout his life and ones he passed on to his sons. Bob took an interest in pecan trees several years ago by planting and producing a pecan grove on his property. He started with just a pecan and watched it grow into a seedling then a tree. Bob grafted each tree and could identify each tree and tell you the characteristics of each pecan. Also, Bob took an interest in honey bees. He had several hives of his own and happily delivered honey to some of his favorite people. Bob became a mentor to several both for bees and pecan trees. Bob was always willing to share his knowledge and to help you get started. Bob also volunteered---a lot. He was a Salvation Army Kettle ringer, Salvation Army volunteer and First United Methodist Church volunteer. He loved cooking eggs for the Methodist Men’s Breakfast. Bob was quite a blood donor, 28 gallons. He was honored by being inducted into the American Red Cross Hall of Fame. Bob was most proud of his involvement with the American Legion where he was a member of the 40 & 8 and served in many capacities. He was a member of the Funeral Detail, which honored veterans with their Military Rites throughout the area. He and the ‘crew’ attended hundreds of funerals and were proud to do so. Bob was happiest when he was outside. It didn’t matter what he was doing, he just wanted to be out. He often said, “Every day is a good day, some days are just better than others”. Bob took great pride in his grandchildren and great grandchildren. His eyes would light up when the great grandchildren would visit. He was often known for lovingly tormenting them! Bob is survived by his wife Juanita, children Steve (Ginny) Cline, Ronnie (Patty) Cline, David (Ilene) Cline and Trish (Ed) Goodman. Grandchildren Justin (Crystal) Cline, Tyler (Moriah) Cline, Lucas (Sadie) Goodman, Mika (Robert) Land, Ryan Goodman, Chad (Dr. Lauren) Cline, Emily (Johnny) Waechter, 10 great grandchildren and a brother, George (Carolyn) Cline as well as extended family members and friends. Bob was preceded in death by his parents and a brother, Raymond Cline. In lieu of flowers, the family requests a donation to the Miami First United Methodist Church Visitation will be Sunday, January 3, 2021 from 1:00 PM until 6:00 PM at Brown-Winters Funeral Home and Cremation Service in Miami. Graveside services will be Monday, January 4, 2021, 2:00 PM at Glen Abbey Memorial Gardens. The family requests that masks be worn. Arrangements are under the care of Brown-Winters Funeral Home and Cremation Service. Friends and family may send the family notes of encouragement by viewing Mr. Cline’s Tribute Page at www.brown-winters.com.

Robert Lewis Cline (Bob) was born April 14, 1929 in Branchville, Maryland, to Raymond and Elsie Cline. He married Juanita Periman June 17, 1951. they were married for 69 years. They began their married life in Michigan where Bob proudly served... View Obituary & Service Information

The family of Robert "Bob" Lewis Cline created this Life Tributes page to make it easy to share your memories.

Send flowers to the Cline family.