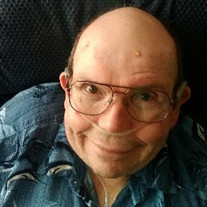 Richard Duane Gardner, 79-year-old Miami, Oklahoma resident passed away Monday January 28, 2019 in Joplin, Missouri. Richard was born on December 24, 1939 in Wichita, Kansas to William and Lois (Horner) Gardner. He worked for many years at Home of Hope in Vinita and after leaving there he retired. An avid fisherman, Richard loved to take his nieces along with him on fishing trips. Richard was a strong Christian and a member of the Nazarene Church since 1962 and a member of New Life Nazarene Church in Miami, Oklahoma since May of 1976. Richard was preceded in death by his parents William Arthur Gardner and Lois A. DaMetz and three sisters, Marilyn Goossen, Wanda Burns and Beverly Ann Gardner. Richard is survived by a sister Patricia Baker and husband Larry of Miami, Oklahoma, and seven nieces, Kathy Knox of Flower Mound, Texas, Kimberly Garrett of Broken Arrow, Oklahoma, Lori Holland of Denver, Colorado, Kristin White of Denver, Colorado, and Karen Weeks of Wichita, Kansas, Kelly Ashley of Farmington, New Mexico, Sharon Maynard of Massachusetts and a nephew Terry Goossen of Farmington, New Mexico. Richard is also survived by numerous great nieces and nephews. A Visitation for friends and family will be held from 3:00 p.m. to 5:00 p.m. on Thursday, January 31, 2019 at the Brown-Winters Funeral Home and Cremation Service in Miami. Funeral Services for Richard will be held at 10:00 a.m. Friday February 1, 2019 at the New Life Nazarene Church in Miami, Oklahoma. Interment will follow at Grand Army of the Republic Cemetery. Notes of encouragement for the family may be left at www.brown-winters.com Services are under the direction of Brown-Winters Funeral Home and Cremation Service, Miami.

The family of Richard Duane Gardner created this Life Tributes page to make it easy to share your memories.

Send flowers to the Gardner family.