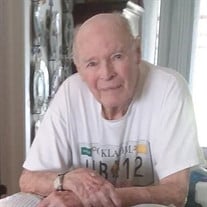 Randolph W. Walker, 99, a lifetime Miami resident passed away on Wednesday, June 17, 2020 at Heartsworth Care Center in Vinita, Oklahoma. Randy was born on July 18, 1920 in Miami to James Wade and Callie Cordelia (Rayon) Walker. He graduated from Miami High school, then attended and played football for NEO A&M College. He joined the Army Air Corp during World War II where he was a Base Fireman and a Physical Training instructor from 1942-1946. He then moved back to Miami and married Betty Lou Garrett on September 7, 1946. He went to work at B.F. Goodrich where he was working in the 80/60 lab when he retired in 1982. He and Betty Lou had also bought some farm land outside of Miami where he enjoyed working over the years. Randy drove a school bus for many years for Miami Public Schools which helped him keep up with and support the Miami Wardogs. He supported both Miami High School and NEO’s Programs. Randy was a proud Wardog and was proud of the fact there are five generations of Wardogs in the family. Something else he was very proud of was his having gave blood to the Red Cross until he was not able anymore. He and Betty Lou have been members of First Baptist Church for approximately seventy years. Mr. Walker was preceded in passing by his parents, James and Callie Walker, his sisters Eloise Holden and Adah and Elma Sample. Survivors include his love of seventy three years Betty Lou Walker of the home, his son Chad Walker of Miami, daughter Teresa Harlan and her husband Jim of Miami, his grandchildren Jeff Harlan and his wife Deloris, Tara Gragg and her husband D.J., Aaron Walker and his wife Andra along with his great grand children Zachary Harlan, Hannah Gragg, Joshua Gragg, Khyla Gragg, Clara Walker and Jake Walker. Visitation will be on Sunday, June 21, 2020 from 2:00 PM until 4:00 PM at Brown-Winters Funeral Home and Cremation Service in Miami. There will be a Celebration of Life 2:00 PM on Monday, June 22, 2020 at First Baptist Church in Miami with Reverend Rick Longcrier officiating. Casketbeaers will be Jeff Harlan, D.J. Gragg, Aaron Walker, Zachary Harlan, Larry Smith and Colby Allen. Interment will follow at the Grand Army of the Republic Cemetery. Military Honors will be provided by the Funeral Honors Team from Fort Sill. Services are under the care of Brown-Winters Funeral Home and Cremation Service of Miami. Friends and family may send the family notes of encouragement by viewing Mr. Walker's Tribute Page at www.brown-winters.com

The family of Randolph W. Walker created this Life Tributes page to make it easy to share your memories.

Send flowers to the Walker family.