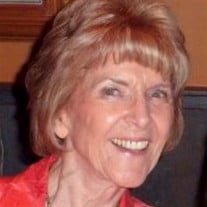 Peggy G. (Roberson) Earls, mother of our life ─ June 12, 1930 - July 19, 2019. We will forever be grateful she was our mom. She was a smart and interesting individual ─ a devoted wife, incredibly devoted mother and grandmother, a loving sister and aunt, and a loyal friend to so many who knew her. She is survived in death by her son Charles B. Earls III, by her daughter Peggy Lea (Earls) Godwin and husband Gary Godwin, and by her beloved granddaughter Olivia Grace Godwin. Also, by step-granddaughter Kristy (Godwin) Martin and her husband David Martin, and their two sons Benjamin and Andrew. Also, by her dear sister-in-law Clara Mae (Earls) Rowley-May, and by many nieces and nephews, and grand nieces and nephews, and countless other family and friends. Peggy was born in Fairland, Oklahoma to Warren and Minnie (Robertson) Roberson, and was the youngest of three. Both Warren and Minnie precede her in death. Also, she is preceded in death by her husband Charles B. Earls II (“CB”) who she married shortly after graduating from high school in 1948. They were married until his death in 1993. She is also preceded in death by her two older brothers, Warren Jr. and Jappie Roberson. She is also preceded in death by a host of family members, some of whom include sisters-in-law Norma Jean (Earls) Johnson, Mary (Tipton) Earls and Betty (Nichols) Roberson, brothers-in-law Elzie Earls, J. C. Johnson, and Eldon Rowley. She graduated from Fairland High School and went almost immediately to work for B. F. Goodrich in Miami, and she worked there until sometime in the early 1970s, when she went to work as a secretary in the District Attorney’s office in Miami (working some years later in Jay, Oklahoma as well ─ alongside her colleague and co-conspirator Laura Jackson), and she worked there until about 1992 when she retired. Her and her husband CB enjoyed a very short retirement period together before he died in June of 1993. She continued to live in Fairland until 1997, at which time her granddaughter Grace was born in Houston, Texas; whereupon, Peggy immediately moved to Houston to help care for Grace ─ which she did for several years. Then, in 2016, Peggy Lea and Gary relocated to Austin, Texas and at that time Peggy moved into a senior facility in Austin where she lived until her death. Peggy will be remembered for her wit, intelligence and goodness but most of all for being a wonderful mom. Visitation will be on Friday, July 26, 2019 from 6:00pm to 8:00pm at the Brown-Winters Funeral Home and Cremation Service in Fairland, Oklahoma at the corner of Highway 60 (W. Conner Ave) and North Smith Street. Funeral services will be Saturday July 27, 2019 at 10:00 am at the same Brown-Winters facility in Fairland. Interment will follow at the Fairland cemetery. A family-and-friends reception for all will be held back at the Brown-Winters Funeral Home’s Fellowship Hall in Fairland.

The family of Peggy Earls created this Life Tributes page to make it easy to share your memories.

Send flowers to the Earls family.