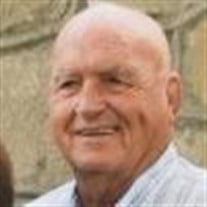 Paul C. Williams, 81, a longtime Rural Miami resident passed away on Friday, January 1, 2021 at Integris Miami Hospital. Paul was born on January 5, 1939 in Afton, Oklahoma to Waldo H. and Ophellia “Velie” (Woody) Williams. Paul worked at Goodrich where he cured tires until the closing of the plant. He also worked as an auto mechanic for all those years and even after retirement. Paul was a constant tinkerer. Was always buying and selling and scraping. One of the things he enjoyed most was his grandchildren and also had a love for guns. He enjoyed going to gun shows, buying and trading and at one time had his FFL. Every Thursday he held court around 2pm at the old Afton garage attended by several old friends. Mr. Williams parents Waldo and Velie Williams preceded him in passing along with a brother Virgil Williams and a sister in law Luretta Williams. Survivors include his wife of over 60 years Rosalee (Gaines) Williams of the home, his children Joyce Montgomery and her husband Darin of Miami, Terry Williams and his wife Lois “Fern” of Claremore, his brothers James E. Williams and his wife Sharon of Miami and Anthony “Tony” Williams of Miami, his grandchildren Sarah “Liz” Montgomery, Chance Montgomery, M’Lynn “Glamour” Robertson, Tyler “Calvin” Williams and Brittany Rekieta and her husband Tyler, and Paul’s great grandchildren Jordan Quapaw, Henleigh Robertson, Ava Rekieta and Jerzie Rose Jimerson. Visitation will be on Wednesday, January 6, 2021 from 5:00 PM until 7:00 PM at Brown-Winters Funeral Home and Cremation Service in Afton, Oklahoma. Gravesides Services are 10:00 AM, Thursday, January 7, 2021 at Mount Hope Cemetery in Afton with Reverend Brian Gibson officiating. Services have been placed in the care of Brown-Winters Funeral Home and Cremation Service in Afton. Casketbearers will be Chance Montgomery, Tyler “Calvin” Williams, Jeb Williams, Jason Speer, James Douthit and Gary Culver. Honorary Casketbearers will be Billy Mack Harrison, Gene Vinyard, Ralph Wright, Bob Hipkins, Johnny Johnson and Tom Phipps. Friends and family may send the family notes of encouragement by viewing Mr. Williams' Tribute Page at www.brown-winters.com.

The family of Paul C Williams created this Life Tributes page to make it easy to share your memories.

Send flowers to the Williams family.