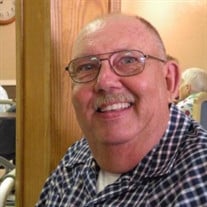 Paul L. Seckman, 72, a resident of Miami passed away at his home on Tuesday, May 19, 2020. He was born on Father’s Day, June 20, 1947 to John Paul and Mildred (Horton) Seckman in Joplin, Missouri. Paul graduated from Baxter Springs High School with the Class of 1965. He married Thelma Dobbs on July 22, 1968 in Arkansas City, Kansas. After attending Pittsburg State University, he started a lifelong career with Burlington Northern Santé Fe. He was a Senior Controller and worked for BNSF for forty years until retiring June 19, 2012. He and Thelma were members at First Christian Church in Baxter Springs. Mr. Seckman was preceded in passing by his parents John and Mildred Seckman, along with his sisters Virginia Wheeler and Francis Gibson. Survivors include his wife of fifty three years Thelma Seckman, his children George M Seckman and his wife Tomoko of Tokyo, Japan, Jason P. Seckman and his wife Mindy of Watauga, Texas, Lucinda D. Chaffin and her husband Brady of Topeka, Kansas, his grandchildren Sally Seckman, Braden Chaffin, Mason Seckman, Maddie Seckman and Jackson Seckman, his brother John P. Seckman and his wife Patricia of Hillsboro, Missouri, his sister Mary Pierce of Boise, Idaho, and his many family and friends from around the country. Mr. Seckman’s wishes were to be cremated. His family will be planning a Celebration of Life for a later time. Services have been placed under the care of Brown-Winters Funeral Home and Cremation Service in Miami. Friends and family may send the family notes of encouragement by viewing Mr. Seckman's Tribute Page.

Paul L. Seckman, 72, a resident of Miami passed away at his home on Tuesday, May 19, 2020. He was born on Father&#8217;s Day, June 20, 1947 to John Paul and Mildred (Horton) Seckman in Joplin, Missouri. Paul graduated from Baxter Springs High... View Obituary & Service Information

The family of Paul L Seckman created this Life Tributes page to make it easy to share your memories.

Paul L. Seckman, 72, a resident of Miami passed away at his home...

Send flowers to the Seckman family.