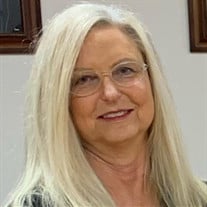 Patsy Jane Rogers, 65, a longtime Miami area resident passed away on Saturday, January 15, 2022, at Coffeyville Regional Medical Center in Coffeyville, Kansas. Mrs. Rogers was born on October 6, 1956, in Sallisaw, Oklahoma to David and Ancle (Estep) Green. Patsy worked as an assistant postmaster for many years before her retirement. She and her husband owned Rogers Insurance in Miami. It all started at a basketball game in Roland. Two years later as a young sailor was coming home from Navy Bootcamp Patsy met Charles Rogers with his parents to welcome him back. It wasn’t much longer after that Patsy married Charles on September 25, 1972. Their family would grow to add their daughters. After moving to Miami for Charles to work at Farm Bureau Patsy stayed home with the girls until Charity was around five years old. That is when patsy’s career at the Post Office Started. She at one time won Postal Clerk of the Year. She retired from the post office with twenty years. She had worked during that time at the family’s insurance company and continued to do so after her retirement. Mrs. Rogers was preceded in passing by her parents, a sister Colleen Garcia and a brother-in-law John Rockwell. Those who will cherish Patsy’s memory are the love of her life Charles Rogers of the home, her daughters Devony Hope Metcalf and her husband Colby of Galena, Kansas and Charity Faith Rogers of Miami and her granddaughter whom she loved dearly Avery Jane Purdy-Rogers. Through the years she had raised many other Children. Other survivors include her siblings Carolyn Rockwell of Jefferson City, Missouri, Carl Kidd and his wife Shirley of Muldrow and Gary Don Kidd of Muldrow. Also surviving are her sister-in-law Patricia Laub, a brother in laws Aaron Gilkey and his wife Kathy and Ronnie Rogers and his wife Brenda. Visitation will be 6:00 PM until 8:00 PM on Thursday, January 20, 2022, at Brown-Winters Funeral Home and Cremation Service in Miami. There will be a Celebration of Life at 2:00 PM, January 21, 2022, at Grace Church in Miami under the care of Brown-Winters Funeral Home and Cremation Service in Miami. The family has asked that memorial contributions be made to St. Jude’s Children’s Hospital in Patsy’s name. Friends and family may send the family notes of encouragement by viewing Patsy’s Tribute Page at www.brown-winters.com.

The family of Patsy Jane Rogers created this Life Tributes page to make it easy to share your memories.

Send flowers to the Rogers family.