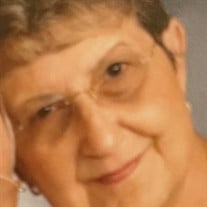 Patricia Jalane Stickler (Marion) 7/21/1934 – 12/22/2021 Pat was born in Butler, Missouri on 7/21/1934 to Morton and Jessie Marion. She had 2 sisters, one older, Shirley Fosdick and one younger, Bobby Hounschell. The Marion’s moved from the Lamar, Colorado area to Missouri in 1950 and Patricia graduated from Midway High School in the Newtonia/Stark City Missouri area with the class of 1952. While attending Midway High School, she met Don McInturff and married him in 1953. Don and Pat had daughter Terry (Batchelder) on June 1,1954. Pat and Terry moved back to Colorado late summer of 1954. At that time, she reconnected with Gene Stickler, who she had previously known while living in Colorado. They wed on 11/3/1956 and had a daughter, Sheryl (Hemmrich) on 8/6/1957. Pat worked at the Lamar Daily News, The Valley State Bank, Troy Motel doing taxes and eventually took over the books in the family business of The Valley Glass Shop. She followed Gene all over the country attending trap shoots and they did some traveling in their motorhome with family and friends. After retiring Gene and Pat moved back to Stark City, Missouri. They still enjoyed traveling in their motorhome, their yard, their dogs and really enjoyed Branson with family. Around 2016 they moved over to Miami, Oklahoma onto the location of daughter, Sheryl, due to their mobility challenges. Dad lived there for a couple of years and then with failing health went to Nursing Care facility in Quapaw Oklahoma, only about 6 or 7 miles from their home. Dad passed in May of 2018 and Patricia continued living in their Miami Oklahoma home until March of 2021, where she too resided in the same facility Dad had lived and died in. Where-as Dad kind of enjoyed the care facility, Patricia did not and enjoyed getting out as much as possible. She always was ready to go but with a quick decline physically and mentally, it was clear even the little day trips too much for her. Pat had 2 grandsons from Sherry, Shane and Ky Hume and 1 granddaughter and 1 grandson from Terry, Jayda and Travis Batchelder. She has 4 great grandchildren, 3 from Shane, Keegan, Killian and Shiloh Hume and 1 from Ky, Kelton Hume. She had many nieces and nephews who always had great fun memories of her. Any pain and suffering she was experiencing has now turned into joy and peacefulness which is all we want for our loved ones. She had her parents Morton and Jessie Marion, her husband, Gene Stickler, her brother- in-law, Tony Fosdick and her Grandson, Ky Austin Hume at the doors of Heaven to greet her and she loved them all dearly. There will be no services per her request. She will be cremated and put in Dad’s grave at the National Cemetery in Sturgis, South Dakota.

The family of Patricia Jalane Stickler created this Life Tributes page to make it easy to share your memories.

Send flowers to the Stickler family.