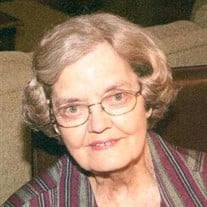 Norma Jean Mabon, of Miami, Oklahoma passed from this world into her heavenly home on Tuesday, January 1, 2019 at Integris Miami Hospital. Norma Jean Buzzard was born July 1, 1928 to Albert G. and Mazie (Hansford) Buzzard. Norma grew up in Quapaw, Oklahoma then graduated from Quapaw High School. She later attended NEO A&M College and Ozark Bible College. While working at B.F. Goodrich in Miami in the Steno Pool she met Dale Taylor Mabon of Miami; they married February 25, 1951 at First Christian Church in Quapaw. Norma gave birth to her only child David Taylor Mabon on January 27, 1957. She began working part time at Wiley Rexall Drugstore in the early 1960’s. After forty years she retired from what had become Osborn Drugs in Miami. She had been a member of First Christian Church in Miami for forty years, singing in the choir for decades. She was a charter member of the quilters group and was eventually a co-leader of the funeral dinner ministry for many years after her retirement. Norma was preceded in death by her husband Dale, her parents, her brothers Garold and his wife Evelyn Buzzard, Loren Buzzard and his wife Mildred, AG Buzzard and his wife Betty, Jack Buzzard and wife Jackie and one sister Helen Buzzard Biever and her husband Lloyd. She is survived by her son David Mabon and his wife Carol of Bartlesville, three grandchildren Caitlin Mabon and Mackenzie Mabon of Tulsa, and Derek Mabon and his wife Brianna of Springfield, Missouri, her sister in law Z. Jane Osborn of Miami and a multitude of beloved nieces and nephews. Visitation will be 2:00 PM until 4:00 PM on Sunday, January 6, 2019 at Brown-Winters Funeral Home and Cremation Service in Miami. Services will be 2:00 PM, Monday, January 7, 2019 at First Christian Church in Miami with Pastors Brian Brubaker and Leon Weece officiating. Interment will follow at the Grand Army of the Republic Cemetery under the care of Brown-Winters Funeral Home and Cremation Service of Miami. The family has asked that memorial contributions be made to the memorial fund of First Christian Church in Miami. Friends and family may send the family notes of encouragement by viewing Mrs. Mabon's Tribute Page at www.brown-winters.com.

The family of Norma Jean Mabon created this Life Tributes page to make it easy to share your memories.

Norma Jean Mabon, of Miami, Oklahoma passed from this world into...

Send flowers to the Mabon family.