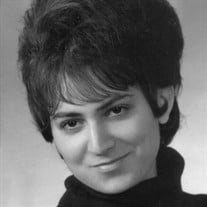 Monika E. Huffman departed this life on April 25th, 2021 in a local hospital in Tucson, Arizona after a heroic multiyear long struggle with COPD. She was a 15-year resident of Miami, Oklahoma. Monika was born on April 16, 1946 to Ludwig Kratzer and Else Kratzer in Gruenstadt, Germany. Monika married Clinton G. Huffman in 1965 in her hometown church in Gruenstadt. He survives of the home in Miami. Monika was preceded in passing by her parents and a brother, Helmut Kratzer. Her surviving brother is Udo Kratzer of Gruenstadt, Germany. Survivors include her two sons Clinton T. Huffman and wife Theresa of Centreville, Virginia, Steven K. Huffman and wife Shannon of Miami, Oklahoma. She is also survived by four grandsons who were the apple of her eye, Jacob, Clinton A., Christian, and Benjamin.She was preceded in passing by a grandson, Trey Logan Huffman. She also leaves behind five former exchange students from Finland and Germany (Henriikka, Andreas, Thomas, Susi and Katja) who still refer to her as “Mom”. Monika was a very accomplished person. She won awards for swimming as a teenager. Additionally, she became a licensed Show Window Decorator after serving a three-year apprenticeship in Germany. She was a supervisor for a western clothing manufacturer. She also was a Head Cashier, Bank Accounts Lead and a Floral Shop Manager for seven years. Her greatest joy came after moving to Miami where she became well known for her beautiful handmade Quilts. She donated them to different people and to the annual church auction for First Christian Church in Miami. She also made and donated numerous prayer quilts. Her giving spirit reflected her deeply held religious beliefs as a saved Christian. She walked the Christian walk with cheer and a loving heart. Her marriage to a military man who became a contractor after military retirement entailed many moves to places such as Alabama, Maryland, New Mexico, Alaska, Germany, California, Colorado, Louisiana and finally to Oklahoma. She embraced each move and made lasting friends during her time there. Her lifelong passions were faith, family, friends, travel, quilting, cooking, various arts & crafts and rooting for the Alabama Crimson Tide. A Memorial Service for Monika will be conducted on July 10th at 1:00PM in First Christian Church, Miami, Oklahoma. There will be a meal after the service in the Fellowship Hall inside the church. Interment in a National Cemetery will occur at a future time after the passing of her husband. At that time there will be a joint funeral service and their ashes will be mixed so they can be eternally together. In lieu of flowers please consider a donation to the American Lung Association. Friends and family may send the family notes of encouragement by viewing Monika's Tribute Page at www.brown-winters.com.

Monika E. Huffman departed this life on April 25th, 2021 in a local hospital in Tucson, Arizona after a heroic multiyear long struggle with COPD. She was a 15-year resident of Miami, Oklahoma. Monika was born on April 16, 1946 to Ludwig Kratzer... View Obituary & Service Information

The family of Monika E. Huffman created this Life Tributes page to make it easy to share your memories.

Send flowers to the Huffman family.