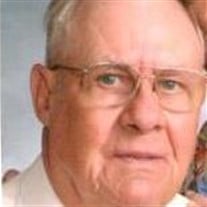 Melvin Eugene Stickler (Gene) born on June 4, 1932 went home to his be with his Mother, Francis (Gittings) Stickler, Father, Byron Glenn Stickler and 2 baby brothers, Donald and Gale Stickler on May 18, 2019. He has only left to watch over his family on earth which includes his wife of 63 years, Patricia (Marion) Stickler, 2 daughters and their spouses, Terry (Stickler) Batchelder and her husband Blake Batchelder, Sherry (Stickler) Hemmrich and her husband Tim Hemmrich. He has 4 grandchildren, Shane Hume, Ky Hume, Travis Batchelder and Jayda Batchelder and 4 Great Grandchildren Keegan Hume, Killian Hume, Kelton Hume and Shiloh Hume. He is also leaving 2 brothers Tommy Stickler and his wife Cecilia of Pasco WA, and Richard Stickler and his wife Mary Ann of Lamar Co. Gene was born and raised around Lamar Colo and graduated from Lamar High School in 1950. After high school he served in the Army during the Korean War. When he returned home from the war, he worked at the Valley Glass Shop and later he and his father bought the business.. His glass shop was always full of friends stopping into hang out and had a row of chairs set out just for that reason. He treated everyone with kindness and always took care of the ones who were struggling. He continued working the glass shop until he retired and moved to Stark City, MO in 1994. Gene loved to hunt, trap shoot, reload ammo, water ski, ride dirt bikes and never turned down an opportunity to help a person out. He could fix or build anything and could make anything out of nothing. He always had people bringing him something to fix and quickly became a known fix it man. He was very proud of his family and always let you know in his own way. The first grandson named him Poppy which stuck, and to the grands and greats, he is known as Poppy. To his daughters, he is known as the best Dad in the whole world? At his request he will be cremated and has also requested no services. Never-the-less we will honor his life in each our individual ways. Heaven has a new angel and the family he left behind has a new Guardian Angel. His last words were “Everything will be okay.” And it will……. Rest in the peace you deserve Pops! Services have been entrusted to Brown-Winters Funeral Home and Cremation Service in Miami, Oklahoma. Friends and family may send the family notes of encouragement by viewing Gene’s Tribute Page at www.brown-winters.com.

Melvin Eugene Stickler (Gene) born on June 4, 1932 went home to his be with his Mother, Francis (Gittings) Stickler, Father, Byron Glenn Stickler and 2 baby brothers, Donald and Gale Stickler on May 18, 2019. He has only left to watch over his... View Obituary & Service Information

The family of Melvin Eugene "Gene" Stickler created this Life Tributes page to make it easy to share your memories.

Send flowers to the Stickler family.