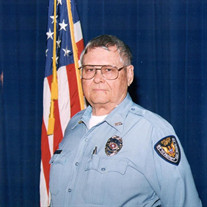 Melvin Leroy Simmons, 89 year old, Miami, Oklahoma, resident passed away on Friday, February 28, 2020, surrounded by his loved ones. Melvin was born on August 14, 1930, to Eldon Leroy and Trixie Charla Pearl (Bacon) Simmons in Chetopa, Kansas. He graduated Fairland High School in 1948. Melvin married Frances Boyd on January 27, 1951, in Fairland, Oklahoma. In 1952, he joined the U.S. Army. Melvin received his basic training at Camp Pickett, Virginia. He then served his two year stint in the army as a dental technician in Albuquerque, New Mexico. Melvin worked as a mill worker for BF Goodrich for 37 years. A year after retiring from BF Goodrich, he went to work as a security officer at Northeastern A&M College. In January of 2000, when Melvin was 69 years old, he began Council on Law Enforcement Education Training (CLEET) to become a police officer for the college. He said he wished he had become an officer sooner because he really enjoyed it. As the oldest officer to graduate CLEET, he was an inspiration to the others going through training with him, including his 27 year old roommate. Melvin retired 11 years later in 2010 after celebrating his 80th birthday. He was a member of the Evening Lions Club of Miami, American Legion Post #147 and served as the commander 4 different times. He also served on the Veteran’s Funeral Detail and always helped with Oklahoma Boys State. He was also a member of the Gideon’s and Lone Star Baptist church, where he served as deacon, Sunday school teacher, and choir member. He was preceded in death by his parents, Eldon and Trixie Simmons; and two brothers, Charles Simmons and Ronald Simmons. Melvin is survived by his wife of 69 years, Frances Simmons of the home; three daughters, Debra Shafer and husband John of Galena, Kansas, Donna Pryor and husband Jack of Miami, Oklahoma, and Doris Shelton of Miami; one son, Ernest Simmons and wife Wanda of Stillwater, Oklahoma; grandchildren, Kyle Shafer and wife Kim, Ryan Shafer, Dennis Anderson and wife Jordan, Adam Pryor and wife Ellie, Megan Shelton Harwood, Alicia Pryor, Emily Harp and husband Graham, Whitney Shafer and Moriah Shelton; great grandchildren, Tori Shafer, Alex Shaffer , Elsie Pryor, Anderson Pryor, Austin Jinks, Hunter Jinks, Adrick Harwood, and Bently Anderson; brothers, Darrel Simmons and wife Kay of Miami, Oklahoma, and Roger Simmons and wife Jeanette of Houston, Texas; sisters in law, Alma Lee Patton of Miami, Oklahoma and Pat Simmons of Henryetta, Texas; and a host of nieces and nephews. Other special people he thought of as grandchildren, Jason Gibson and family, Sheila Warrington and family, and Alicia Shelby. Funeral Services will be held on Tuesday, March 3, 2020 at 10:00 am at Lone Star Baptist Church in Fairland, Oklahoma. Reverend Brian Gibson and Reverend Skip McClain will officiate. Visitation will be held on Monday, March 2, 2020, from 6:00 pm to 8:00 pm at Lone Star Baptist Church. Casketbearers will be Chigger Gibson, Luke Warrington and Melvin’s grandchildren. In lieu of flowers donations may be made in Melvin’s name to Lone Star Baptist Church or to Gideons International. The family wishes to give a special thanks to Integris Hospice, the staff at Grandwood, Chigger and Pat Gibson, Luke and Sheila Warrington and Jason Gibson families. Friends and family may send the family notes of encouragement by viewing Mr. Simmons’ Tribute Page at www.brown-winters.com Services are under the direction of Brown-Winters Funeral Home and Cremation Service, Miami.

The family of Melvin Leroy Simmons created this Life Tributes page to make it easy to share your memories.

Send flowers to the Simmons family.