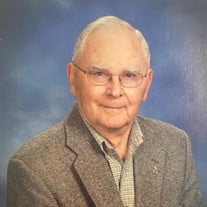 Melvin Henry Prater, 92, a longtime Miami resident passed away on Wednesday, May 5, 2021. Mr. Prater was born on December 27, 1928 in rural Wyandotte, Oklahoma side to Reverend Earl and Erna (Fawks) Prater. Melvin went to work as a young at the Prater Saw Mill for years before entering the Navy. He was a Seabee in the Navy where he served in, Adak and Aleutian Islands in Alaska. When Melvin returned from serving in the Navy he married the loved of his life Helen Jane Smith, went back to work at Prater Saw Mill, then worked for the Frisco railroad, then landed at BF Goodrich in the Banbury form for thirty-five years. After his time at BF Goodrich he went to work at Commerce Sales for ten years then to Sun Kissed Floral to help his daughter Anita by delivering. He and his wife Helen Jane Prater loved to travel in their fifth wheel, they had visited forty-six of the forty-eight states they could drive to. They played dominoes and cards with their friends over the years, Melvin enjoyed fishing. Melvin was very active in his church, First United Methodist Church in Fairland as Sunday School Superintendant and as Sr. Adult Sunday School Class Teacher. Melvin was preceded in passing by his parents, Earl and Erna, his wife Helen Jane Prater, his brothers and sisters Helen, Don, Martha, Edna, Rush and Becky. Survivors include his children Anita Smith and her husband Ben of Miami, Mark Prater and his wife Dixie of Broken Arrow and Tammy Prater of Miami, his brother Ken Prater of West Seneca, Oklahoma, Danny Prater and Mary Lewis of North Carolina, his grandchildren Kevin Hatley and his wife Tera of Miami, Colby Hatley and his wife Beth of Springfield, Thomas Prater of Broken Arrow and Natalee Prater of Broken Arrow, Great grandchildren Brandi Hatley and Austin Hatley and three great-great grandchildren Tevin Hatley, Darrien Alexander and Daizee Hatley. Visitation will be Tuesday, May 11, 2021 from 1:00 PM until 2:00 PM at First United Methodist Church in Fairland. Services will be 2:00 PM on Tuesday, May 11, 2021 at First United Methodist Church in Fairland. Interment will follow at the Seneca Cemetery under the care of Brown-Winters Funeral Home and Cremation Service in Miami. Pallbearers will be Mark Prater, Ben Smith, Kevin Hatley and Colby Hatley. The family has asked in lieu of flowers to donations to be made to the First United Methodist Church of Fairland. Friends and family may send the family notes of encouragement by viewing Mr. Prater’s Tribute Page at www.brown-winters.com.

Melvin Henry Prater, 92, a longtime Miami resident passed away on Wednesday, May 5, 2021. Mr. Prater was born on December 27, 1928 in rural Wyandotte, Oklahoma side to Reverend Earl and Erna (Fawks) Prater. Melvin went to work as a young at... View Obituary & Service Information

The family of Melvin Henry Prater created this Life Tributes page to make it easy to share your memories.

Send flowers to the Prater family.