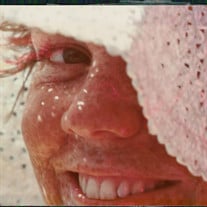 Maureen F. Pierson, 70, a longtime Miami resident passed away at Mercy Health System in Joplin on Monday, February 22, 2021. Mrs. Pierson was born on October 12, 1950 in East Boston, Massachusetts to Eugene Downing and Gloria (Kennedy) Reihl. Maureen graduated with the class of 1968 at Arlington Massachusetts. At Maureen’s families home she married Robert Pierson on September 18, 1976. She worked as a book keeper for most all of her life. Maureen enjoyed crafts and was an avid reader, but mostly enjoyed spending time with her grandchildren. Mrs. Pierson was preceded in passing by her parents Eugene Downing and Gloria Reihl and a sister Gloria Coffey. Survivors include her husband of forty-four years Robert Pierson of the home, her children Sara Temple and her husband Benjamin of Miami, Brian Pierson and his wife Jessica, of Georgia, Michael Pierson and his wife Emily of Norman, Oklahoma, also surviving are her brother and sisters, Eugene Downing, Cathy Acton, Marion Tansey, Joan McGovern, Eileen Doty, Dianne Downing and Christine Downing along with her grand children Mackenzie Temple, Conner Temple, Brayden Temple, Oliver Pierson and Theo Pierson. There will be a Celebration of Life for Maureen at 2:00PM on Thursday, February 25, 2021 at First Christian Church with Minister Brian Brubaker officiating. In lieu of flowers the family has asked that memorial contributions to First Christian Church. Friends and family may send the family notes of encouragement by viewing Maureen's Tribute Page at www.brown-winters.com.

The family of Maureen F. Pierson created this Life Tributes page to make it easy to share your memories.

Send flowers to the Pierson family.