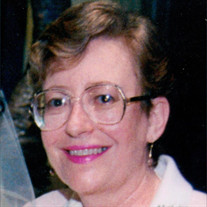 Mary Webb Mason, Age 77, passed away on October 10, 2020 at Grand Lake Villa Nursing Home in Grove, Oklahoma. Mary was born January 28, 1943 in Glasgow, Scotland to David Hansen Gilken White and Mary Ann (Webb) White. Mary grew up in Scotland where she received her education before traveling to Germany to work. It was in Germany she met her husband, James W. Mason whom was stationed there with the United States Army. Mary and James were married in Scotland and returned to Germany to finish her husband’s service time and traveling to the United States later. Mary was a homemaker and loved taking care of her two children, which was the joy of her life. Later Mary held several different jobs from waitressing, to cashier at a drug store to receptionist at the Stables Casino. Mary had many interests from reading great books, crossword puzzles, watching movies to fishing with her husband, and Mary loved bingo and also Santa Claus, which was her “favorite guy” next to her husband. Mary loved laughing and joking with everyone she met. A proud moment in Mary’s life was receiving her U.S. citizenship in 1973. Mary always said “I’m from Scotland, but I’m a proud American.” Another one of Mary’s joys was the birth of her two grandchildren, Justin and Lauren. Mary is preceded in death by her husband of 51 years James W. Mason, her parents David and Mary White of Scotland, sisters Jean McGuire of Scotland and Anne Matheson of Texas. Survivors are, daughter Marilyn (Mason) Uto and husband Lee D. Uto of Miami, Oklahoma, Son James R. Mason and wife Dianne E Mason and their children Justin and Lauren Mason of Memphis, Tennessee. Mary is also survived by one sister Tessie Porter of England. Graveside Services for Mary will be held at 2:00 p.m. on Tuesday October 20, 2020 at the Chelsea Cemetery in Chelsea, Oklahoma. Reverend Sandra Ross will officiate. In lieu of flowers donations may be made in Mary’s name to the Alzheimer’s Association. Notes of encouragement for the family may be left at www.brown-winters.com Services are under the care of Brown-Winters Funeral Home and Cremation Service, Miami.

The family of Mary Webb Mason created this Life Tributes page to make it easy to share your memories.

Send flowers to the Mason family.