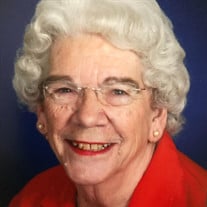 Mary Lou “Sally” Wernette Curry was born in Fort Smith Arkansas on Nov. 21, 1934, the youngest of the three children of Andrew R. and Lorene M. Danner Wernette. She graduated from Fort Smith High School in 1952 and attended West Ark Jr. College where she met the love of her life, James N. Curry. They married in 1955 and celebrated their 64th wedding anniversary in March of this year. Sally was a homemaker in the truest and best sense of the word. She made each of the houses she moved into over her lifetime a home for her husband and two children. She was the best fried chicken and fish cooker! Sally was a life-long member of the Methodist Church and served her congregations as a Sunday School teacher, a youth group leader, and a Lay Speaker, as well as being an active member and leader of United Methodist Women. She always found ways to serve in her communities – as a Girl Scout Leader and Red Cross swimming/water safety instructor for many years; she was the substitute teacher the kids DIDN’T want because she was tough, and she also worked for the Ottawa County Extension Service in the late 1970s. She spent as much time as possible outdoors – as a nature lover she understood the importance of taking care of our natural resources. She was an avid angler her entire life, fishing from coast to coast in both fresh and saltwater with her husband, son, daughter and grandsons. Whether she was fishing from a canoe in the wilderness of Canada or a Grand Lake fishing dock she always stayed for one more cast. She enjoyed feeding and watching songbirds and hummingbirds; observing the local ground hog, red fox or fat squirrel; beachcombing, finding shells and stones; and collecting pinecones and acorns from trees across the country as she traveled. While traveling she also recorded many books for the visually impaired. She was an avid fan of the OKC Thunder and the Arkansas Razorbacks. In addition, she was a supporter of the arts in NE Oklahoma as a member of the Friends of the Coleman Theater, Miami Little Theater, public library volunteer and other community events. Sally was preceded in death by her parents, older brother George W. Wernette, and older sister Julia D. Patterson. She is survived by her husband, James N. Curry; her daughter, Laura L. Curry Barnett and son-in-law Lamar Barnett (Lake Mary, FL); her son, James Neil Curry, Jr and daughter-in-law Wanda Curry (Little Rock, AR); six grandsons, and three great-grandsons. There will be a Celebration of Life at First United Methodist Church in Miami, Saturday, September 7, 2019 at 1:00 PM under the care of Brown-Winters Funeral Home and Cremation Service in Miami. Friends and family may send the family notes of encouragement by viewing Sally's Tribute Page at www.brown-winters.com.

The family of Mary Lou "Sally" Curry created this Life Tributes page to make it easy to share your memories.

Send flowers to the Curry family.