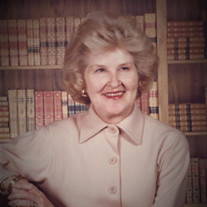 Mary Nidiffer VanBeber Freeman died Monday, September 20, 2021 at a private care facility in Mesquite, Texas. Mary was born in Fairland, Oklahoma on January 15, 1922 to Robert Henry Nidiffer and Eulah (May) Nidiffer. Mary graduated from Fairland High School with honors, the salutatorian of her class. Her high school teachers influenced her decision to attend North East Oklahoma Junior College, Miami, and North East Teachers College in Tahlequa, earning degrees in Elementary Education. She taught school at Oseoma, Oklahoma, a rural school with one room serving grades 1 through 8. She also taught first grade at Fairland Grade School. She was next employed by Eagle Pitcher Mining and Smelting Company as a bookkeeper. While at Eagle Pitcher, she met her first husband, Hance VanBeber. They married on July 21, 1950 and resided in Miami on Bay Street in a stylish mid-century modern home decorated with art painted by Mary as well as a notable collection of paintings by regional artists. An active member in social circles, especially the Miami Golf and Country Club, Mary was also a lifetime member of PEO Chapter AJ. Mary’s church home was the First Presbyterian Church of Miami, where she served as a deacon, sang in the choir, and participated in the United Presbyterian Women’s Organization. Mary was also a certified member of the Cherokee Nation of Oklahoma. Following the death of Hance G. VanBeber in 1982, Mary was married to Jack G. Freeman of Fairland, OK in 1989. He preceded her in death in 1994. Mary was also preceded in death by her parents and three sisters, Fayrene, Dorothy, and Robideen (Bobbi), as well as her beloved step-son and his wife, Henry G. VanBeber and Bette Boyer VanBeber. Mary was adored by her grandchildren, nieces and nephews, and their children, all of whom will cherish the memory of her constant love, attention and encouragement. She is survived by her grandchildren, Cindy VanBeber-Rosen, Nancy VanBeber Clem and spouse Chris, Matthew VanBeber and spouse Shannon and Greg VanBeber and spouse Leslie, 11 great grandchildren and several nieces and nephews. Throughout her life, Mary was recognized for her statuesque bearing, her beautiful blonde hair and being a fashionista before that was even a “thing”. She will be remembered for her avid interest in literature and for her skill as an entertainer, hosting grand dinner parties and cocktail hours. Her joy in living a full life was contagious to all who knew her. Her spirit serves as an amazing legacy that her surviving family and loved ones will strive to emulate in a testament to her influence on their lives. Mary's Services will be 11:30 AM on Friday, October 1, 2021 at First Presbyterian Church in Miami with Reverend Ray Vandegiesen officiating. Interment will follow at the Columbus Cemetery under the care of Brown-Winters Funeral Home and Cremation Service in Miami. Friends and family may send the family notes of encouragement by viewing Mrs. Freeman's Tribute Page at www.brown-winters.com.

The family of Mary Van Beber Freeman created this Life Tributes page to make it easy to share your memories.

Send flowers to the Freeman family.