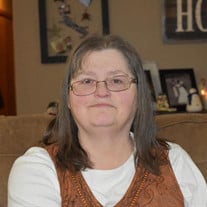 Lucille Jane Tisdale, a sixty-two-year-old Wyandotte resident passed away at her home on Monday, April 4, 2022. She was born on September 5, 1959 to Kenneth and Patricia (Hauser) Bales. She spent her younger years in Germany due to her father being in the military. She graduated high school in Mannheim, Germany. After moving back to the United States, she attended Northeastern Oklahoma A&M College, where she graduated from the nursing program in 1982. Jane worked as a critical care nurse. Most of her career was as a traveling nurse where she was able to help people all across the country, from New York to California. Lucille also had an artistic side to her. She enjoyed pottery and beading, before working in the medical field she wanted to be a photographer. She was also known as an animal lover. She had dogs and cats, but she truly enjoyed the company of her cats. Lucille was proud to be part of a nursing family. She and her brother are second generation nurses and her daughter is a Nurse as well. Mrs. Tisdale also earned her Bachelor’s Degree from Missouri Southern State University in 2018. Jane is preceded in passing by her husband, Charles Tisdale, parents, Kenneth and Patricia Bales, brother Daniel Bales, and sister Eva Bales-Bone. Survivors include her daughter Deidre Bales-Poirot of New York, a brother Kenneth Bales of Wyandotte, her sister Jaycee Bales of Joplin, and grandchildren Allysun, Severin Alexander, and Adonis. Services will be held at 2 P.M. on Friday, April 8, 2022, at Brown-Winters Funeral Home and Cremation Service Chapel in Miami, Oklahoma with Ceremonial Chief Shawn King officiating. Friends and family may send the family notes of encouragement by viewing Mrs. Tisdale’s Tribute Page at www.brown-winters.com.

Lucille Jane Tisdale, a sixty-two-year-old Wyandotte resident passed away at her home on Monday, April 4, 2022. She was born on September 5, 1959 to Kenneth and Patricia (Hauser) Bales. She spent her younger years in Germany due to her father... View Obituary & Service Information

The family of Lucille Jane Tisdale created this Life Tributes page to make it easy to share your memories.

Send flowers to the Tisdale family.