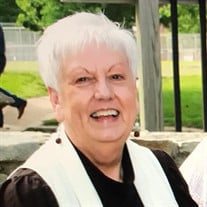 Linda Arlene Palm was born October 11th, 1941 in Chetopa, Kansas to Herman & Margaret Palm. The family owned a soda shop in downtown Chetopa for many years. She proudly played trumpet and marched in the Wardog Band before graduating from MHS and then furthering her education at NEO A&M. She continued to play in the community band and loved to play piano. In 1964, she met the love of her life, Larry D. Reece, while dragging Main Street and pulling into Doc’s Drive-In for a DP in Miami, Oklahoma. The two would be engaged in less than a month and were married on September 25th, 1964 at The First United Methodist Chapel in Miami. Larry & Linda would remain a team for nearly 54 years. They resided in the same home in Miami for 50 of those years before moving to Stillwater to be with family and to cheer on their beloved OSU Cowboys. Linda was all about family and, along with Larry, never missed a sporting event or performance by their two sons or grandchildren. She was the rock of the Reece family and always made sure that everyone was taken care of. Linda worked as a medical transcriptionist for Dr. Cosby in Miami before transitioning to Osborn Drugs. She was an integral part of the Osborn Drugs family for 35 years. She was a proud member and Sunday school teacher at The First United Methodist Church, a member of the Business & Professional Women’s group of Miami and the National Medical Transcriptionist Association. She is survived by her two sons and their families, Larry D. Reece II & his wife Jimi & Lance A. Reece & his wife Rebekah, all of Stillwater, Oklahoma; her grandchildren, Lauren, Ellie & Lucas Reece, as well as step-grandchildren, Hannah Burns of Columbus, Kansas & Colton Abernathy of Miami and their families. She is also survived by cousins Carol Kelley and Susan Mogilka and their families, all of Oklahoma City, sister-in-law Kathleen Palm of Catoosa and several nieces & nephews she adored. A Celebration of Life will be held at the Miami First United Methodist Chapel 200 B St. NW on Saturday August 31st at 1pm. Services are under the care of Brown-Winters Funeral Home and Cremation Service in Miami. In lieu of donations... send flowers! She would love that. Friends and family may send the family notes of encouragement by viewing Mrs. Reece’s Tribute Page at www.brown-winters.com.

Linda Arlene Palm was born October 11th, 1941 in Chetopa, Kansas to Herman & Margaret Palm. The family owned a soda shop in downtown Chetopa for many years. She proudly played trumpet and marched in the Wardog Band before graduating from MHS... View Obituary & Service Information

The family of Linda Reece created this Life Tributes page to make it easy to share your memories.

Send flowers to the Reece family.