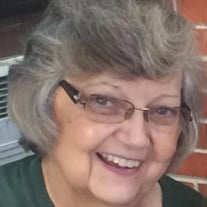 Linda Lou Nehring, 71, a resident of Miami passed away at Integris Miami Hospital on Sunday, July 18, 2021. Linda was born February 18, 1950 in Fairland, Oklahoma to Charley E. and Maraba Emma Jane (Hood) Graham. She attended Afton Schools before the family moved to Miami. She graduated from Miami High School with the class of 1968 and attended NEO A&M and Ozark Christian College. On January 2, 1970 she married Rex Nehring. Mrs. Nehring started working for N&R Industries, Joe Thompson and Nehring Supply. She then worked as a pharmacy tech for many years for Wal-Mart and Sam’s. She worked on Seventh Street Wal-Mart in Joplin when she retired after thirty-three years. Linda enjoyed working and seeing people daily, many became lifelong friends. She and her husband Rex were members of First Christian Church in Miami. Before Linda‘s health declined, and she received her first organ transplant (a liver) in 1996, then after years of dialysis she was blessed with a kidney transplant in September of 2017. She was a very active person at First Christian Church. She worked in the office for a brief time, sang in the choir, and was the head of the baby nursery for about 20 years, where she could be found every Sunday morning, lovingly caring for our babies. Linda also helped to sponsor the Bible Bowl Team during the 80’s and early 90’s, and she assisted with numerous children’s musicals. Linda was also very active in the Sweet Adelines in Miami and also when they moved to Joplin during the 70’s and 80’s. Mrs. Nehring was preceded in passing by her dad Charley Graham and one brother Earnie, a sister-in-law Anna Graham and a grandson Gage. Survivors include her mother Maraba Graham, her husband Rex Nehring, her daughter Tricia Shinaway and her husband Mario, a brother Gary Graham, her grandchildren Kasandra Clapp, Tuff Cook and Braven Shinaway along with her sister-in-law Karen Hasslet and her husband Mark. Also surviving are her Nieces, Nephews, other relatives and close friends. Visitation will be Wednesday, July 21, 2021 from 5-7PM at Brown-Winters Funeral Home and Cremation Service in Miami. Graveside Services will be 10:00 AM on Thursday, July 22, 2021 at Grand Army of the Republic Cemetery with Pastor Jerad Joslin officiating. Services are under the care of Brown-Winters Funeral Home and Cremation Service in Miami. Friends and family may send the family notes of encouragement by viewing Mrs. Nehring’s Tribute Page at www.brown-winters.com.

The family of Linda Lou Nehring created this Life Tributes page to make it easy to share your memories.

Linda Lou Nehring, 71, a resident of Miami passed away at Integris...

Send flowers to the Nehring family.