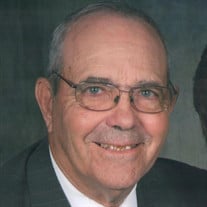 LeRoy H. Schulte, 89, Longtime Afton farmer passed away at his home on Wednesday, November 11, 2020. LeRoy was born in Amarillo, Texas to Herman and Elizabeth (Neiberding) Schulte. In his youth he was a member of the local 4-H and FFA organizations, which gave him the love for farming and ranching. His father Herman served in the Army in France during WWI. He had two brothers who served during WWII, Clarence who served in the Navy, and Frances who was killed in action at the Battle of the Bulge while serving in the Army. LeRoy also has a daughter Julie who served in the Navy for 8 years. LeRoy served in the Army during the Korean War from 1953 to 1955. He was a Sergeant in the motor pool. He was injured while on Active Duty and was honorably discharged from the service. Once he returned home he bought a farm next to his parents and began his farming career. He drove a school bus for Afton Public Schools for 27 years while still farming. LeRoy has served on many councils for different organizations during his lifetime. He has been a member of the American Legion Post 147 in Miami, OK, for over 64 years and has served as Commander and Vice-Commander. He was part of the flag detail, putting up flags around the county for different holidays and played the bugle for the funeral detail. He has also been a member of the Disabled American Veterans (DAV) for the last 64 years. LeRoy has been a member of Sacred Heart Catholic Church in Miami, OK for over 70 years where he was a member of the Knights of Columbus, and has volunteered many hours to helping others. On April 17, 1963 he married Patricia Ann Quackenbush of Vinita, Oklahoma. LeRoy and Patricia had eight children Christopher and his wife Rom Schulte, Michael and his wife Angie Schulte, Steven Schulte and James and his wife Julie Schulte, Michel and her husband Greg Heatley, Christine and her husband Brian Crossley, Stephanie and her husband Gregg Sweeten and Julie Kleinknight. He has twenty-six grandchildren and twelve great-grandchildren. Also surviving are his brother Raymond Schulte and sister Mary Foust. Mr. Schulte was preceded in passing by his parents Herman and Elizabeth Schulte, his wife Patricia Schulte, two brothers Francis Schulte and Clarence Schulte and one sister Rita Foust. There will be a Rosary on Sunday, November 15, 2020 at 2:00 PM, following the Rosary there will be a visitation until 4:00 PM at Brown-Winters Funeral Home and Cremation Service in Miami. There will be a Mass of Christian Burial at Sacred Heart Catholic Church in Miami at 10:00 AM Monday, November 16, 2020. Interment will follow at the Glen Abbey Memorial Garden in Miami. The family has asked that memorial contributions be made to American Legion Post 147,PO Box 669, Miami, OK 74355 Friends and family may send the family notes of encouragement by viewing Mr. Schulte's Tribute Page at www.brown-winters.com.

LeRoy H. Schulte, 89, Longtime Afton farmer passed away at his home on Wednesday, November 11, 2020. LeRoy was born in Amarillo, Texas to Herman and Elizabeth (Neiberding) Schulte. In his youth he was a member of the local 4-H and FFA organizations,... View Obituary & Service Information

The family of LeRoy H. Schulte created this Life Tributes page to make it easy to share your memories.

LeRoy H. Schulte, 89, Longtime Afton farmer passed away at his...

Send flowers to the Schulte family.