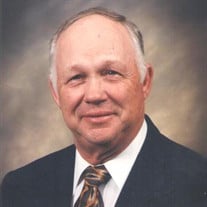 Larry Edward Davis a lifelong Ottawa County Farmer/Rancher passed away on Sunday, February 3, 2019 at Freeman Health System in Joplin. Visitation will be on Friday, February 8, 2019 at Brown-Winters Funeral Home and Cremation Service in Miami from 6:00 PM until 8:00 PM. There will be a Celebration of Life 10:00 AM on Saturday, February 9, 2019 at First Baptist Church in Miami with Rev. Rick Longcrier and Rev. Noah Palmer officiating. Interment will follow at Glen-Abbey Memorial Gardens in Miami. Memorial Contributions may be made to The Baptist Children’s Home of Owasso, NEO Ag Department Crop Research in care of the funeral home. Mr. Davis was born February 25, 1938 in Miami, OK to Leroy M. Davis and Mary Evalene Boswell Davis. Larry owned and operated a diversified grain and cattle operation in Ottawa County producing wheat, corn, soybeans and cattle known as Twin Rivers Grain and Cattle. Larry had numerous agricultural science awards and achievements. He was named Master Agronomist by OSU Department of Agronomy in 1990 due to his sound principles of soil management and crop production. Larry graduated from Wyandotte High School in 1956. He joined the army after high school and went to basic training at Ft. Bliss, Texas and then Aberdeen, Maryland Proving Grounds for tank and equipment training. His service included six months active duty and seven and a half years in the Army Reserves. After his active duty service in the Army, he entered Northeastern Oklahoma A&M College 1957-1959 and obtained an Associate of Arts degree. At N.E.O., Larry was a faithful and dedicated member of the Baptist Student Union where he served as President for two years. His winning smile and positive attitude earned him many honors. He loved people and never met a stranger. He attended Oklahoma Baptist University at Shawnee, Oklahoma in 1959 and graduated in 1961 receiving a Bachelor’s Degree in Psychology and a minor in Sociology. He met Julianna “Judy” Swadley at O.B.U. and they were married on September 17th, 1961 at First Baptist Church in Eufaula, Oklahoma. They moved to Miami and took over the family farming operations due to the illness of his father. During this time he also worked at BF Goodrich and taught school at Wyandotte High School for five years, coaching girls’ basketball and teaching Social Studies from 1969-1973. He was elected to serve as a member of the Wyandotte School Board in January of 1974 and served there for five years while continuing to build the farming operation. Larry was a faithful life-long member of First Baptist Church of Miami. He was a Volunteer Youth Director the summer of 1958. He served as a deacon after being ordained January 25th, 1976. He taught Sunday school to the youth and adults for many years and served on the personnel, properties, pulpit, and other numerous committees. He also was a member of the Worship Choir. He loved parties, picnics, hayrides, and teaching the kids how to play football or drive. Larry was a beloved husband, father, grandfather and Godly man who loved the Lord and his church. He was a diligent worker for the Oklahoma Soybean Growers Association serving in various key leadership roles on a local and national level. Larry’s hard work and perseverance to succeed is evident due to his ingenuity and timing to produce the best crops through innovative machinery and soil conservation. He relied on God to guide him through adversity with an unwavering strength and positive attitude. His gracious attitude to help others will always be remembered. Larry’s organizations: Member of the Oklahoma Soybean Association serving as President, Member of the Oklahoma Soybean Commission appointed by Governor Nigh in 1979, he served as member and President, Member of the American Soybean Association, Member of the Ottawa County Agriculture Extension and Research Advisory Committee, Member of the Oklahoma State University Advisory Committee as Chairman, Soy Action Chairman of the OK Soybean Association, OK State University Experiment Station Cooperation for thirteen or more years providing test plots, Former Ottawa county Soil Conservation Board member for five years, Member of the Oklahoma Soybean Federation as Secretary, Member of Ottawa County Farm Bureau serving on Resolution Committee, Past Director of the National United Soybean Board of Directors representing Oklahoma and he was a Member of the Gideon’s International and Ottawa County Gideon’s Camp. He was awarded 1965 Master Dairyman and 1990 Master Agronomist OSU. A man with a strong dedication to his family, Larry is survived by his wife of 56 years Julianna (Judy); Daughter, Juli Diana Davis of Miami, Oklahoma; son, Joseph Alan Davis of Miami, Oklahoma; his grandchildren; Sarah Jo Davis and Guy Alan Davis of Wyandotte, Oklahoma; his sister, Norma Sue Simpson of Duarte, California; his nieces; Laura Jimenez of Duarte, California and Sue Randolph Simpson of Clovis, California; brother in-law, Steve Swadley and wife Beverly and son Drew of Eufaula, Oklahoma. Friends and family may send the family notes of encouragement by viewing Mr. Davis’ Tribute Page at www.brown-winters.com.

The family of Larry Edward Davis created this Life Tributes page to make it easy to share your memories.

Send flowers to the Davis family.