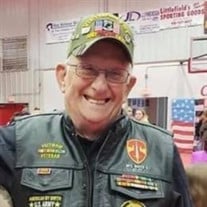 Larry Eugene Boyd, 80, a longtime Fairland resident and retired Army Veteran passed away on Tuesday, January 19, 2021. He was born on April 7, 1940 to Clinton Wilbur and Ruth Audrey (Baker) Boyd. He married the love of his life Vera Ruth Brock on July 25, 1959 in Fairland. He then joined the United States Army September 4, 1957 in Oklahoma City. Larry was in the Army for over twenty years and was awarded a Bronze Star. He was stationed throughout the United States, Europe, and Southeast Asia. Larry was later stationed at Fort Sill, Oklahoma before retirement. He and Ruthie were members of First United Methodist Church in Fairland. Mr. Boyd was a trustee at the Church for many years too. Larry was very active all his life. He worked as a Volunteer Fireman and was at one time Chief at Fairland Fire Department. He spent time on the Fairland Public School Board and was a member of the Disabled American Veterans and American Legion. Larry enjoyed traveling, crocheting, was a master fisherman and story teller and talker. Mr. Boyd was preceded in passing by his parents Clinton and Ruth Boyd, step-mother Lois Boyd, one brother Raymond Boyd, along with two step brothers, Ronald Vincent and Jim Vincent. Those left to carry on Larry’s legacy are his wife Vera R. “Ruthie” Boyd of the home, Teresa Turner and her husband James of Miami, Tim Boyd and his wife Laura of Neosho, Lisa Fields and her husband Donnie of Fairland and Jeff Boyd and his wife Alexandra of Fairland.​Also surviving are his grandchildren Amanda Keaton and her husband Michael, Jamie Turner, Keeley Fields, Clinton Boyd and his wife Tiannah, Noah Fields and his wife Whitney, Newt Turner, Adrienne Boyd and fiancé Matthew Tyree, and Elizabeth Boyd along with seventeen great grandchildren (another one on the way) and one great great grandchild. Visitation will be 6:00 p.m. to 8:00 p.m. on Thursday, January 21, 2021 at Brown-Winters Funeral Home and Cremation Service in Fairland. There will be a Celebration of Life at 2:00 p.m. on Friday, January 22, 2021 at First United Methodist Church with Reverend Shannon Rodenberg officiating. Interment will follow at the Fairland Cemetery with Fort Sill Military Honors Team providing Military Honors. Larry has requested that his pallbearers be his grandsons and granddaughters. The family has asked that memorial contributions be made to the First United Methodist Church in Fairland or the American Heart Association. Friends and family may send the family notes of encouragement by viewing Larry’s Tribute Page at www.brown-winters.com.

Larry Eugene Boyd, 80, a longtime Fairland resident and retired Army Veteran passed away on Tuesday, January 19, 2021. He was born on April 7, 1940 to Clinton Wilbur and Ruth Audrey (Baker) Boyd. He married the love of his life Vera Ruth Brock... View Obituary & Service Information

The family of Larry Eugene Boyd created this Life Tributes page to make it easy to share your memories.

Send flowers to the Boyd family.