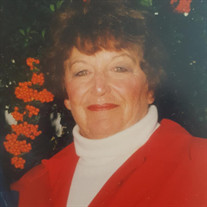 Kay Powell of Miami, Oklahoma, passed away Wednesday April 8, 2020 following a battle with COPD. She was eighty years old. She is survived by her husband of thirty-eight years, Ted Powell. She is also survived by two daughters, Kimberlee Dobbin and husband Ken, of Wolcott, New York, and Kelly Ferrente, of Newark, New York; a step-daughter, Casey Lynn Powell Mancuso, residing in Plaquemine, Louisiana. There are six grandchildren; Jillian Kay Sherwin of East Rochester, New York; Jared Sherwin of Greece, New York; Alexandra Ferrente of East Rochester, NY; Erin Ferrente, residing in Aspen, CO; and Ali Grace and Kane Mancuso of Plaquemine, Louisiana. There are also several special friends in the Miami-Joplin area: Rose Surratt Qualls, Patty McDowell, Diane Strick, and Dr. Shirley Chesnut. The family would like to express acknowledgment and special thanks to Curtis Scheurich, her long time friend and caretaker, for his unending devotion to her and Ted. Also, many thanks to the area hospitals, nursing facilities and Hospice for their excellent care over the past few difficult years. Kay was born at her home on October 8, 1939, on her family’s fruit farm in the Wolcott, New York area. She was the youngest of three daughters of Ralph and Beulah (LeFevre) Morrell, who preceded her in death, as did her older sisters: Phyllis Hogan and Lois Younglove, both of the Wolcott, New York Area. Kay’s last employment was nineteen years as an intake receptionist at Grand Lake Mental Health, Miami. Kay will be remembered by her many friends as an out-going, humorous, warm-hearted person who had the ability to put you at ease and make you feel comfortable. She was also an animal lover, well-known for nurturing a variety of four-legged friends over the years. Kay chose cremation and had requested donations to Miami’s Animal Welfare Shelter on East Central in lieu of floral remembrances. Private family services will be held at a later date. Online condolences may be directed to www.brown-winters.com Services are under the direction of Brown-Winters Funeral Home, Miami.

Kay Powell of Miami, Oklahoma, passed away Wednesday April 8, 2020 following a battle with COPD. She was eighty years old. She is survived by her husband of thirty-eight years, Ted Powell. She is also survived by two daughters, Kimberlee Dobbin... View Obituary & Service Information

The family of Kay M. Powell created this Life Tributes page to make it easy to share your memories.

Send flowers to the Powell family.