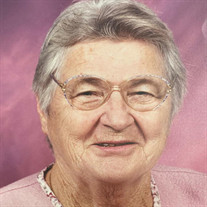 Kathe (Klein) Hill of rural Wyandotte died on January 22 at her home surrounded by her family. She was 92. Kathe was born to Theodor and Therese Klein in Kirchdorf A.Haunpold, West Germany on October 15, 1928. She lived her childhood in Bruckmuhl, West Germany were she met Kenneth E. Hill an American Airman. They married November 4, 1947, in Germany; where they left Bremehaven, Germany on December 20, 1947, aboard the Troop Transport Edmund B-Alexander for the USA. They arrived in New York City on January 2, 1948. Kathe left her four siblings and her mother behind to start her life in America. She started her new life as a farmer’s wife in Fairland, OK on the Hill Family Farm eventually moving to rural Wyandotte adding another farm homestead. Kathe missed her home and family so much. She was fortunate to return to Germany every summer for many years as her and Kenneth’s health allowed. Kathe and Kenneth built a farm with cattle and crops over the years always maintaining a large garden to provide for their family. Kathe and Kenneth had three children Helen, Howard and Mark. All pitching in on the farm, this was their livelihood and farm life was Kathe’s new normal. She journaled everyday writing about farm life and life in general. Her stories were like no other and what she survived in Germany in World War II made her a strong, grateful, worker. She was so proud of her US Citizenship and not being a “drag” on society. She was actively involved in the Home Demonstration Club in Ottawa County. She started the first Well Child Clinic in Fairland and Wyandotte vaccinating for polio and other illnesses. She was a “go getter” on all levels. She canned, baked, put up honey and chickens, milked cows, ranched, drove tractors, and so much more. The German city girl turned all around farmer’s wife being named the Ottawa County Farm Woman of the Year in 1959 and nominated as Oklahoma Farm Woman of the Year in 1960. After her children were grown she went to work in the cafeteria at Wyandotte Public Schools. She was an outstanding cook and quickly became the most popular baker in Wyandotte Schools’ history. Her hot rolls and cinnamon rolls were bar none. She baked as many as 900 rolls in a day. Alumni of Wyandotte still speak of her homemade rolls. She loved the students of WPS so much she would find recipes in her 1000 cookbooks and calculate the ingredients to make the recipe for the entire school. Kathe retired from WPS in 2013 after 30 years of service, to work on the farm. She checked cows on her buggy alone and by truck, opening gates for her youngest son Mark everyday up until her stroke this past summer. Kathe is survived by her three children Helen Christie of Fairland, Howard Hill and wife Karen of Wyandotte, and Mark Hill and wife Doris of Fairland. Grandchildren Becky DeLozier, husband Devin, sons Dax, Dade, and Dacen of Adair, Matt Christie, wife Sheri and daughter Gabi of Seneca, MO, Kristy Hill and Carl of Adair, David Christie, wife Carissa sons Ryker and Sterling of Galena, KS, Jared Hill and children Madison, Kylie, Kenneth, Bear, and John of Fairland, Misty Ellison and husband Marcus sons Cooper and Case of Fairland, and Justin Hill of Fairland. She was preceded in death by her husband Kenneth E. Hill, her parents Theodore and Therese Klein, her sisters Resi and Alfriede and brothers Theodore and Sepp. In lieu of flowers send donations to Wyandotte Community Food Bank ℅ Faith Assembly of God, 310 N Main, Wyandotte, OK 74370. There will be a Rosary for Kathe at 6:00 PM on Monday, January 25, 2021 at Brown-Winters Funeral Home and Cremation Service in Miami. Visistation will follow from 6:30 PM until 8:00 PM. The Mass of Christian Burial will be Tuesday, January 26, 2021 at Sacred Heart Catholic Church in Miami. Interment will follow at Fairland Cemetery under the care of Brown-Winters Funeral Home and Cremation Service in Miami. Friends and family may send the family notes of encouragement by viewing Mrs. Hill's Tribute Page at www.brown-winters.com.

Kathe (Klein) Hill of rural Wyandotte died on January 22 at her home surrounded by her family. She was 92. Kathe was born to Theodor and Therese Klein in Kirchdorf A.Haunpold, West Germany on October 15, 1928. She lived her childhood in Bruckmuhl,... View Obituary & Service Information

The family of Kathe Hill created this Life Tributes page to make it easy to share your memories.

Kathe (Klein) Hill of rural Wyandotte died on January 22 at her...

Send flowers to the Hill family.