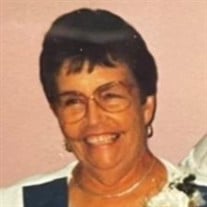 Joyce Phillips Eubanks was born on March 21, 1931, in Anthony, KS to Frank and Dorothy (Ash-Dover) Watley. She departed this life on Monday, January 17th, 2022, at the age of 90 years, 10 months, and 4 days. Joyce was one of eight children and grew up in the Kanima community in Oklahoma. Growing up during the depression, the family survived by sharecropping. For a short period of time, the family moved to California. Joyce wanted to stay there, but instead moved back to Oklahoma with the family and attended Stigler High School. She met W.R. Phillips, and they were married on August 26th, 1947. They had two children, Helen and Bill. W.R. and Joyce started out picking cotton in the fields, taking Helen with them in a box when she was a baby. Joyce attended Free Will Baptist churches her entire life. She enjoyed teaching Sunday School and picking up kids on the bus route. Introducing kids to Jesus was a mission of hers. Eventually Joyce and W.R. began managing large farms and ranches in rural Oklahoma. Later they moved from the farms and began working for Tulsa Public Schools as custodians. Joyce took pride in her work, and loved working with the children and teachers. After retirement, Joyce and W.R. spent several years traveling in their R.V. before settling in Grove, Oklahoma. Joyce loved her family and spending time with them. She loved everything from Sunday afternoon lunches after church, hot dog roasts, family reunions, and holiday gatherings. After W.R.’s passing in 2002, Joyce later married Oren Eubanks. She spent the remainder of her years in the Afton/Grove area. She continued to enjoy family, church, and listening to gospel singing. In her last years, she moved to McAlester to receive care and be close to her son, Bill. Joyce is survived by her son William “Bill” Gene Phillips and wife Kay of McAlester, OK, her brother Jerry Watley (Cassville, MO), sisters Melva Tremaine and husband Ron (Sterling, KS), and Velma Wilfong and husband David (Bernice, OK), grandchildren Machelle O’Dell and husband Sean (Coweta, OK), Will Phillips and wife Sandy (Broken Arrow, OK), Dawn Henderson and husband Luke (Grove, OK); Jeremy Phillips (McAlester, OK); 7 great grandchildren; 5 great-great grandchildren. She was preceded in death by her parents, husband W.R. Phillips, 2nd husband Oren Eubanks, daughter Helen Duncan, son in law James Duncan, brothers Orlin Watley, Norman Watley, Dale Watley, sister Shirley Gault, and her grandson Bryon Duncan. Services were held at 2:00, Monday, January 24, 2022, at Dawson Free Will Baptist Church in Tulsa, Oklahoma in care of Brown-Winters Funeral Home. Interment was at Floral Haven Cemetery, Broken Arrow, Oklahoma.

Joyce Phillips Eubanks was born on March 21, 1931, in Anthony, KS to Frank and Dorothy (Ash-Dover) Watley. She departed this life on Monday, January 17th, 2022, at the age of 90 years, 10 months, and 4 days. Joyce was one of eight children... View Obituary & Service Information

The family of Joyce Elfredia Eubanks created this Life Tributes page to make it easy to share your memories.

Send flowers to the Eubanks family.