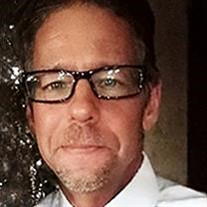 Joseph Alan Davis of Miami, OK was born at Freeman Hospital in Joplin, MO on March 1st, 1967 to Larry and Julianna “Judy” Davis. Larry preceded him in death on February 3rd, 2019. Joseph was a 1985 graduate of Wyandotte Public School in Wyandotte, OK and a graduate of NEO A&M College in Miami, OK where he obtained his degree in applied science. He was owner and operator of Twin River Diesel Repair (2007-Present) and Twin Rivers Trucking (1997-2007). Joseph grew up in Miami, OK and worked with his father, Larry Davis, at Twin Rivers Grain & Cattle. He was extremely skilled in his trade with extensive mechanical and electrical knowledge. He strived for quality work and customer satisfaction. He enjoyed custom glider construction, transmission rebuilds, and specialized rear axle rebuilds. Joseph was baptized at First Baptist Church in Miami on July 14th, 1974 by Dr. Welden Marcum. He attended Cardin First Baptist Church where he helped with the bus ministry transporting youth to and from church. He also volunteered with FBC Cares Ministry in Miami. He found solace in helping those in need. Joseph is survived by his two children, Sarah Jo Davis & Guy Alan Davis and their Mother Casey Jo Davis of Wyandotte; his Mother Julianna “Judy” Davis of Miami; Juli Diana Davis of Miami; Aunt Norma Simpson of Duarte, CA; Cousins Laura Jimenez of Duarte, CA and Sue Randolph of Cloves, CA; Uncle Guy Stephen Swadley, his wife Beverly and their son Drew Swadley of Eufaula, OK. He is preceded in death by his grandparents Evalene and Leroy Davis, and Guy and Ruby Swadley. Visitation will be on Tuesday, November 26, 2019 from 6:00 PM until 8:00 PM at Cardin Baptist Church East of Miami. There will be a Celebration of Life 10:00 AM on Wednesday, November 27, 2019 also at Cardin Baptist Church with Reverend Geoff Buffalo and Reverend Rick Longcrier officiating. Interment will follow at the Glen-Abbey Memorial Gardens under the care of Brown-Winters Funeral Home and Cremation Service in Miami. The family has asked that memorial contributions be made to Souls Harbor in Joplin at 817 South Main Street, Joplin, MO 64801. Friends and family may send the family notes of encouragement by viewing Joey’s Tribute Page at www.brown-winters.com.

Joseph Alan Davis of Miami, OK was born at Freeman Hospital in Joplin, MO on March 1st, 1967 to Larry and Julianna &#8220;Judy&#8221; Davis. Larry preceded him in death on February 3rd, 2019. Joseph was a 1985 graduate of Wyandotte Public School... View Obituary & Service Information

The family of Joseph Alan Davis created this Life Tributes page to make it easy to share your memories.

Joseph Alan Davis of Miami, OK was born at Freeman Hospital in...

Send flowers to the Davis family.