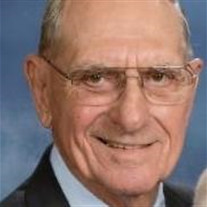 John Richard Weigl, 88, of Miami passed away Saturday, November 16, 2019 at Integris Miami Hospital. He was born on November 10, 1931 in Chetopa, Kansas to August W. and Emma Adele (Abel) Weigl. On January 28, 1952 at the United Methodist Church,... View Obituary & Service Information

The family of John Richard Weigl created this Life Tributes page to make it easy to share your memories.

Send flowers to the Weigl family.