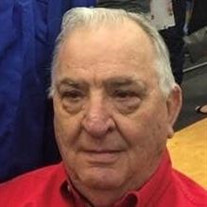 John Paxson John Franklin Paxson went home to be with his Lord on November 28, 2019, on Thanksgiving Day, at the age of 85. John was born Jan 26, 1934 in Baxter Springs to Ward Paxson and Mary Gillespe Paxson, John was the oldest of seven kids. John was preceded in death by both of his parents, his wife of 53 years Joyce Elaine Myers, one son Joe Alan Paxson, two brothers: Ralph Paxson and James Paxson, and one sister Bertie Sue Moss. He is survived by one daughter Jana Wyrick and her husband Jim, one son Jim Paxson and his wife Shanon. 7 grandchildren: Jenna Oskin, Jonathan Sharp, Jamie Hudspeth, Jordan Harrison, Jacob Paxson, Joseph Paxson and Joshua Paxson. 8 Great GrandChildren: Jack and Jett Hudspeth, Audra, Jaylee and Jeremiah Harrison, Maria, Emma and Eden Oskin. Two sisters Mary Lewis and Judy Parham, and one brother Donald Paxson. John attended Miami High School and served his country in the United States Army. John married Joyce Myers March 1st, 1958 and they were married just a few days short of 53 years. John worked for many years at BF Goodrich and would retire from there once the plant closed. Following retirement John drove the special needs bus for Miami Public Schools and Joyce served as his aid on the bus for many years. John also farmed and loved to talk about farming. He could give you the “history” of much of the farmland in this area: who owned it, what they grew, and especially if it was an area he had worked on. John was a hard working talented man. Whether it was working on or rebuilding an engine, building wood projects for his family, reupholstering furniture, quilting, or tying jigs - there wasn’t much he wouldn’t take on or couldn’t do. John loved to laugh and he had a unique ability to get words mixed up or mispronounced which has led to lots of laughter thru the years. John loved to travel. He and Joyce traveled to Korea, Europe, saw most of the US, a lot of it with the “domino group.” They took Alaskan and Caribbean Cruises and loved to go to Branson as often as they could. John was a longtime member of First Assembly of God Church in Miami, OK and served in a number of capacities including serving as a trustee, Royal Ranger Leader, Perky Pioneer leader, and many other positions. John and Joyce served together as cooks for many years as the church youth went to Green Country Youth Camp. John loved to fish. He and Joyce spent many hours fishing Grand Lake. John loved to teach his great grandson Jack about all the aspects of fishing. After Joyce passed away in 2011 John was blessed to meet what would become a very special friend named Jean Caviness. John and Jean would talk on the phone each day, often several times throughout the day. They kept each other company and held each other up in prayer. Jean’s family became a part of Johns. Jean’s daughter Lisa and her husband Rodney held a special place in John’s heart. John and Jean loved to go to Branson together as well as attend Southern Gospel singings. John was so disappointed when his health began to limit the time they could spend together, but that never stopped the fondness for each other from growing. While John was in the nursing home his face would light up when Jean would visit and say “hello pretty girl.” John would tell Jean how much he loved his family and how proud he was of all of them. Joyce and John were foster parents to many girls and many still refer to John as “dad”. One of those girls, Kristy, was the last family member to visit him, just hours before he passed. John was an outstanding man who loved his family and God. He would often share that he was ready to go home to heaven, and he knew that it would be soon. Either thru death or the rapture, but either way he was ready to go and he wanted to make sure that all his family would meet him there someday. Funeral Services will be held at 10 a.m. on Friday December 6, 2019 at First Assembly of God Church in Miami, Oklahoma. A visitation for friends and family will be held from 6:00 p.m. to 8:00 p.m. on Thursday December 5, 2019 also at the First Assembly of God Church in Miami, Oklahoma. Notes of encouragement for the family may be left at www.brown-winters.com Services are under the direction of Brown-Winters Funeral Home and Cremation Service, Miami.

John Paxson John Franklin Paxson went home to be with his Lord on November 28, 2019, on Thanksgiving Day, at the age of 85. John was born Jan 26, 1934 in Baxter Springs to Ward Paxson and Mary Gillespe Paxson, John was the oldest of seven... View Obituary & Service Information

The family of John Franklin Paxson created this Life Tributes page to make it easy to share your memories.

John Franklin Paxson went home to be with his Lord...

Send flowers to the Paxson family.