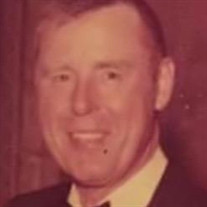 John Swanson Miller, 92, entered the kingdom of heaven joining his late wife, Johnnie Dee, on April 18, 2020. The long-time Bartlesville resident was born the only child to Fred and Emma Miller on Jan. 10, 1928. He grew up and went to school in the Swedish community of Smethport, Penn. His parents were both Swedish, his mother, an immigrant of Sweden. He played sports throughout high school and grew up attending the Lutheran Church. Though he grew up during the Depression and little money was to be had, he wanted to attend college. After high school, he served in the Navy and attended Penn State University for one year and then finished his degree at Marietta College in Ohio with a degree in petroleum engineering. He interviewed and was hired by the Bureau of Mines and moved to Bartlesville. It was on a blind date that he met Johnnie Dee Kampert. He thought the Kansas girl was pretty cute and they eventually married Aug. 6, 1954. The couple was blessed with three daughters, Kathy, Cheryl and Kristina. It was important to the Millers to teach their daughters, good ethics and morals, and the value of a college education. He was extremely proud that all three daughters graduated from college. In addition to his work, John was involved in the community with the Salvation Army and in his church. He was a talented woodworker and built most of the home they lived in on Lester Street as well as all the garage and estate sale finds Johnnie brought home. Following his retirement from the Bureau of Mines, he went to work part-time at The Elks Lodge as secretary for many years. The Millers enjoyed the out of doors frequently going camping and to the lake. John and Johnnie also enjoyed a host of friends, they called “The Group” and enjoyed many outings, trips, social events at the Elks and spending holidays together. He was known to always joke around and give people a hard time even in his last days at the nursing home. John and Johnnie were extremely involved in the Bartlesville Elks Lodge, John serving many roles on the ritual team including exalted ruler. He was a ritual coach for many years and served as state drug chairman. In later years, they enjoyed traveling and went wherever and whenever they could to far-off destinations. The couple’s three daughters were his pride and joy as well as his grandchildren and great-grandchildren. John was preceded in death by his parents; his wife; one grandson, Jeremy Beau King and a host of friends and family. He is survived by his oldest daughter, Kathy Ellis and her husband, Russell, of Commerce, Okla. their oldest daughter Erika of Joplin, Mo. and youngest daughter, Lendi and husband David Bushong of Cheyenne, Wy. and their son, Riley. He is also survived by his second daughter, Cheryl and her husband, Brad King of Miami, Okla., their oldest son and his wife, Kacy and Sharron King and youngest son, Kolton, all of Miami, Okla. Also survived by his youngest daughter, Kristina Dudley, of Bartlesville, her oldest daughter and husband, Kelsey and Luis Sanchez and their two children, Lennon and Elijah and youngest daughter Courtney Dudley all of Broken Arrow, Okla. There will be a time for visitation at Brown-Winters Funeral Home and Cremation Service in Miami from 10:00 AM until 12 Noon on Tuesday, This will be a come and go time for friends to pay their respects. Private Graveside services were held Tuesday at the Ottawa Indian Cemetery in Miami, Okla. where he was laid to rest with his wife, Johnnie. Services are under the care of Brown-Winters Funeral Home and Cremation Service in Miami. “I’ ll be seeing you, dad, in all the old familiar places that this heart embraces all day through…”

John Swanson Miller, 92, entered the kingdom of heaven joining his late wife, Johnnie Dee, on April 18, 2020. The long-time Bartlesville resident was born the only child to Fred and Emma Miller on Jan. 10, 1928. He grew up and went to school... View Obituary & Service Information

The family of John S Miller created this Life Tributes page to make it easy to share your memories.

Send flowers to the Miller family.