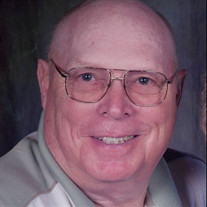 John Austin Lish Jr. eighty-three-year-old, lifetime Miami resident passed away Friday February 21, 2020. John was born on September 7, 1936 in Miami, Oklahoma to John Austin Lish Sr. and Aurora (Hirsh) Lish. After high school John proudly served his country in the United States Army. John married Anna McCorkle on February 9th 1962. After his service John worked for many years at B.F. Goodrich before it closed. John then worked as a toll booth operator for the Oklahoma Turnpike Authority. John was an avid outdoorsman who loved to hunt and fish and shoot skeet. He was a loved man who had a great sense of humor and always made people laugh. He was a lifelong member of the Sacred Heart Catholic Church in Miami. John was preceded in death by a sister Betty Hare. John is survived by his wife Anna of the home, two sons, Robbie Robinson and wife Phillis of Miami, Oklahoma, Gene Robinson of Miami, Oklahoma, a brother, Jim Lish and wife Lurinda of Stillwater, Oklahoma, two sisters Patty Gordon and husband Allen of Roswell, New Mexico, and Rosie Rickard and husband Rodger of Neosho, Missouri. John is also survived by two granddaughters Carrie Homer and husband Brad of Miami, Oklahoma and Christie McDowell and husband Chris of Miami, Oklahoma, and four great grandchildren, David Homer, Abby Homer Andy McDowell and Elizabeth McDowell. A Funeral Mass for John will be held at 10:00 a.m. on Wednesday February 26, 2020 at the Sacred Heart Catholic Church in Miami, Oklahoma. Father Samuel Perez will officiate. Interment will follow at Grand Army of the Republic Cemetery. Notes of encouragement for the family may be left at www.brown-winters.com Services are under the direction of Brown Winters Funeral Home and Cremation Service, Miami.

The family of John Austin Lish Jr. created this Life Tributes page to make it easy to share your memories.

Send flowers to the Lish family.