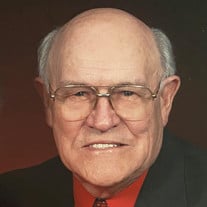 John B. Dillon, 85, a longtime Miami resident, passed away on Thursday, September 17, 2020 at Integris Miami. Mr. Dillon was born on June 14, 1935, in Baxter Springs, Kansas, to Frank P. and Agnes (Carter) Dillon. John graduated with the Class of 1953 from Galena High School. On January 22, 1955, he married the love of his life, Sereta Friend. John worked at the B.F.Goodrich plant until his retirement there. He then worked at Ozark Salad until his retirement there; he then drove a school bus for Miami Public Schools until his retirement from there. He and Sereta were members of First Assembly of God Church in Miami and were very active through the years. Among his many services for the church, John served in the roles of Royal Ranger leader, Chi Alpha sponsor, Sunday School Superintendent for 20 years, and on the Trustee and the Deacon Board for numerous terms. One of John’s duties about which he was most passionate was serving as the director for 20 years of the Green Country Youth Camp. He also took great pleasure in working as the potato peeler and the candy skillet carrier for church dinners and the missionary candy making project. Mr. Dillon is preceded in passing by his parents Frank and Agnes Dillon, and one sister Lois Lewis. Those who will carry on the legacy of John Dillon are his wife of sixty-five years Sereta Dillon, his children David Dillon and his wife Linda of Bixby, Daniel “Danny” Dillon and his wife Vonda of Miami, Debby Davis and her husband Scott of Idaho Falls Idaho, his grandchildren Danette Dillon, Dallas Dillon and his wife Courtney, Destiny Dillon, Hallie Davis, Desiree Dillon, Eric Davis, Dalayna Dillon, Derekka Ybarra and her husband Carlos, his great grandson James Dillon, two sisters Gladys Boatwright and Judith Lambert along with his many other relatives and friends. Visitation will be on Sunday, September 20, 2020 from 6:00 PM until 7:30 PM at First Assembly of God Miami. Services will be on Monday, September 21, 2020, at 2:00 PM at First Assembly of God in Miami with Reverend David Dillon officiating. Interment will follow at Grand Army of the Republic Cemetery in Miami under the care of Brown-Winters Funeral Home and Cremation Service in Miami. Casket Bearers will be Dallas Dillon, Scott Davis, Carlos Ybarra, Jim Paxson, James Stoner and John McNally. Honorary Casketbearers will be Kent and Sherry Sexton, Eugene and Kay Jones, Mary and Kenny Baldwin, Charles and Barbara Stoner, JoAnn Hughes, and Bill and Joy Stoner. The family has asked that memorial contributions be made to https://www.firebible.org/. Friends and family may send notes of encouragement by viewing Mr. Dillon’s Tribute Page at www.brown-winters.com.

The family of John B. Dillon created this Life Tributes page to make it easy to share your memories.

John B. Dillon, 85, a longtime Miami resident, passed away on...

Send flowers to the Dillon family.