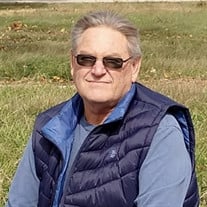 Jimmie "Jim" Murphy, 70, former Miami resident, now Cleora area resident passed away at his home on Saturday, October 9, 2021. Jim was born on September 26, 1951 in Miami to James Woodrow “Woodie” and Verga Helen (Mitchell) Murphy. At the age of sixteen Jim had started his first Scuba Shop in his family’s garage, by eighteen he had his first store front scuba store/gas station. Jim married Kay Lynn Birkes on May 29, 1971 in Miami. Mr. Murphy would continue to be a scuba instructor for many years. During that time, he worked at B.F. Goodrich until its closing. In 1985, Jim opened NEO SCUBA Center in Miami, and eventually relocated the store to Joplin, MO with a name change to Dive Masters. From the time he was 16 until his health no longer allowed, Jim had taught at least a thousand people to SCUBA dive including Search and Rescue teams in the four-state area. In the following years, Jim worked at Radio Shack and then managed Express Cellular and Satellite in Miami. He ended his working career as a custodian at Nichols Elementary in Miami before taking a medical retirement. Jim was a faithful servant at Northwest Baptist Church in Miami. He had attended there since his birth. He was known over the years for always being involved with the youth at his church. He also was the sound and audio video tech as well as a deacon and friend/father figure to many. Jim and Kay had recently joined Lake Center Baptist Church on Monkey Island where they were able to attend church with their kids, grandkids, and extended family. Jim was preceded in passing by his parents Woodie and Verga Murphy. Those left to share in Jim’s legacy are his wife of fifty years, Kay Murphy, his sons Chad Murphy and his wife Sarah of Afton and Tyson Murphy and his wife Brianne of Monkey Island, a brother Woodie Murphy of Tulsa and three grandchildren Sade Murphy, Conner Murphy and Kylee Murphy. In lieu of flowers, donations can be made to the missions fund at Lake Center Baptist Church, 29020 S. Hwy 125, Monkey Island, OK 74331. The family also asks, that if you have not signed up to be an organ donor, to please consider doing so. There will be a Celebration of Life for Jim on Wednesday, October 13, 2021 at 10:00 AM at Northwest Baptist Church in Miami with Reverend Michael Knight officiating. Services have been placed in the care of Brown-Winters Funeral Home and Cremation Service in Miami. Friends and family may send the family notes and videos of encouragement by viewing Mr. Murphy's Tribute Page at www.brown-winters.com.

The family of Jimmie "Jim" Murphy created this Life Tributes page to make it easy to share your memories.

Send flowers to the Murphy family.