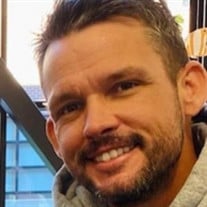 Jeffrey 'Kyle' Darnaby passed away Saturday February 12th 2022. He was 33. Kyle was born may 13th, 1988 to Jeff and Clesta Darnaby in Tulsa, Oklahoma, he was the youngest of three children. Growing up, Kyle loved playing ice hockey and was a natural. Starting at the age of five, he played on both in house and travel leagues. His high scores in math and science landed him the honor of being in the gifted class during his school years. In 2012 Kyle met the love of his life, Courtney Bailey. In 2013 he became the proud father of a son, Bradford. A second son followed in 2014, Penn. He loved Courtney and his boys beyond his ability to express it in words. He would tell how they were perfect, how he could watch them for hours in amazement at how awesome they were. He spent many hours with his family enjoying the outdoors, camping, playing on the lake, riding 4 wheelers and had taken them on their first hunting trip last September. He also enjoyed many vacations with his family, taking many trips to Destin Beach, Florida, Silver Dollar City, and Branson as well as Montana, Yellowstone National Park, Colorado, Hot Springs, Las Vegas, and Galveston. Kyle’s greatest pride & accomplishment was being Bradford and Penn’s dad. He loved Courtney & his boys with all his heart. Before taking a position on the pipeline, Kyle worked in quality control for Nordam. He rose to the level quickly with his excellent work ethics and had a promising future in the aerospace industry. Kyle proudly served his country, joining the Army National Guard in 2013. In 2014 he graduated from Fort Benning, Georgia. In the six years of service, he received many medals of honor, one of which was for his deployment to the Ukraine. There wasn't anything Kyle couldn't do. Kyle could build, electronics, weld, sports, mechanics, you name it and he could figure it out. his intelligence and talent make it hard to understand how this happened. PTSD from the stress of the military along with the stress of switching from a 9-5 career to a job that required him to be away from home for long periods of time and also conflicted with his ability to keep up his army service caused him to not re-enlist and he was honorably discharged. He is survived by 'his love' Courtney, sons Bradford Eli Darnaby and Penn Ryan Darnaby all of the home. His parents Jeff and Clesta from Grove, Ok, his brother and best friend James R Darnaby of Fairland, a sister Larissa and nephew Max Pruner of Tulsa. Brother-in-law Colby Bailey, and a Sister-in-law Casey, both of Tulsa. Uncles, John and Ann Darnaby of Broken Arrow, Rick and Marilynn Darnaby of Tulsa. Aunts, Connie and Mark Strimple of Tulsa, Christy and Sheldon sparks of Jenks. As well as many cousins, including Nikki, Jamie, Katie, Joe, Paul, Steffen, Stuart, Sawyer, Sammy, Matt, Mike, Carrie & Chrissy. Kyle also leaves behind a multitude of friends. He never met a stranger and was loved by many. Kyle was dearly loved by his family and will forever be missed. There is a hole in us where he should be. We know God is faithful and while he is now his hands, we will see him again. Pallbearers will be Jesse Bowdle,Colby Bailey, Tyler Moman, Derek Filsmeyer, Brett Inman, Travis Bates. Honorary pallbearers will be James Darnaby, Bradford Darnaby, Penn Darnaby. A visitation will be held Friday, February 18th at Brown-Winters Funeral Home and Cremation Service in Fairland, Oklahoma from 6-8 there will be a guestbook for his family. Please sign it. A memorial service will be held Saturday, February 19th at the First Christian Church in Fairland. Pastor Gary Radke will officiate. The burial will immediately follow. There will be a celebration of Kyle’s life at the Eagles Landing Clubhouse in Grove near Sailboat Bridge to visit and remember Kyle. Everyone is welcomed to join us. Food will be catered.

Jeffrey 'Kyle' Darnaby passed away Saturday February 12th 2022. He was 33. Kyle was born may 13th, 1988 to Jeff and Clesta Darnaby in Tulsa, Oklahoma, he was the youngest of three children. Growing up, Kyle loved playing ice hockey and was a... View Obituary & Service Information

The family of Jeffrey "Kyle" Darnaby created this Life Tributes page to make it easy to share your memories.

Send flowers to the Darnaby family.