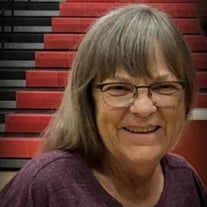 Janet Ruth Hill, 63, a longtime Fairland resident passed away at Freeman Health System in Joplin, Missouri on Sunday, October 18, 2020. Janet was born on January 11, 1957 in Afton, Oklahoma to Doyle Leroy and Stella Ruth (Gibson) Goins. She graduated from Fairland High School with the class of 1975. Janet worked for Oklahoma Natural Gas in Vinita and Miami. She started as a meter reader, but worked her way up to being a Foreman when she retired. Mrs. Hill was a member of Lone Star Baptist Church. When she wasn’t working she loved to be at her grandkids ballgames and other events. Whatever they were doing she wanted to be there. Her parents Doyle and Stella Goins preceded her in passing. Survivors include her children Amy Davis and her husband Raymond of Fairland, Jessica Pinion and her husband Sammy of Fairland, her brothers and sisters Doyle Goins and his wife Sherry of Baxter Springs, Kansas, Don Goins and his wife Terri of Fairland, Judy Hale and her husband Milton of Miami, Jeanie Trease and her husband Steve of Fairland, her grandchildren Ashley Davis, Garrett Davis, Kyndall Davis, Kabella Pinion, Gavin Pinion and Janecka Pinion along with her many other nieces, nephews, other relatives and friends. Visitation will be 6-8PM on Tuesday, October 20, 2020 at Lone Star Baptist Church. Services are 11:00 AM, Wednesday, October 21, 2020 at Lone Star Baptist Church with Reverend Brian Gibson officiating. Interment will follow at the Fairland Cemetery under the care of Brown-Winters Funeral Home and Cremation Service in Fairland. Casketbearers will be Danny Boyd, Garrett Davis, Dean Wyrick, Josh Davis, Milton Hale, Steve Trease, Doyle Goins and Don Goins. Friends and family may send the family notes of encouragement by viewing Mrs. Hill's Tribute Page at www.brown-winters.com

The family of Janet R. Hill created this Life Tributes page to make it easy to share your memories.

Send flowers to the Hill family.