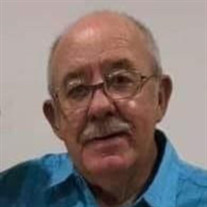 James Carter Howard (Jim) entered into eternity with his Lord and Savior on Friday, June 18, 2021 following a sudden illness. Jim was born on September 24, 1947 to the late Herbert Clarence Howard and Arta Irene Spielman. He was preceded in death by his brothers, Gary W. Howard and John Howard, and sisters, Sharon May Davis and Quanita Long. He is survived by his loving wife Betty Ann and their dog, Molly. Other survivors include his two children. His son, Jeffrey W. Howard, and daughter and son-in-law, Stefanie and Mark Moudy. Seven grandchildren: Devon, Zain, Ethan, and Kaden Howard, McKenna and Chance NeeSmith, Aubree and Hunter Moudy. His brother and sister, Michael W. Howard and Jill Davis, also survive, as well as many nieces, nephews and cousins who loved him. Jim was a proud veteran and served in the United States Navy from 1966-1970. His first two years in the Navy were spent on the aircraft carrier, the U.S.S. Wasp. He then finished the last two years of his Navy career in the naval reserve. While stationed in the Boston naval shipyard, Jim met Betty Ann. This was the beginning of their life together. They were happily married for 52 years. They lived in New England for a short time where Jim was saved at the United Methodist Church in Peterborough, NH in 1975. They later moved to Oklahoma in 1978, where they spent the remainder of their lives together. Jim’s career was an offset pressman. He began his career at Sim’s Press in Peterborough, New Hampshire. After moving to Oklahoma, he taught the classes for the printing program at the Afton campus of Northeast Technology Center (NTC). He was very active in the VICA program during his time at NTC. In 1995, he pursued a lifelong dream of having his own print shop in Carthage, Mo called Howard Graphics. At the end of his career, he worked for Sooner Printing and then Action Graphics, where he later retired. Jim loved his family. They were the joy of his life and brought him so much happiness. Jim and Betty Ann shared a ministry of teaching children about Jesus. They were involved at Tennessee Prairie Friends Church in Galena, KS for 15 years and continued this ministry at the New Life Church of the Nazarene in Miami, OK for the past 5 years. One of Jim’s passions was teaching children about the love of Jesus. He also served on the church board at the New Life Church of the Nazarene. One of Jim’s favorite hobbies was fly fishing. He was an avid fly fisherman who loved to fish and camp in the mountains of Colorado. In his later years, he enjoyed reconnecting with his Colorado family and sharing stories of growing up there. Jim was a great storyteller and loved sharing stories with his grandchildren about his life growing up in Colorado. Upon Jim’s passing, he was surrounded by his loving wife, Betty Ann, children and grandchildren who loved him so much when he went on to be with Jesus. The family will receive family and friends for visitation on Tuesday, June 22 from 6:00-8:00 at Brown Winters Funeral Home in Miami, OK. Funeral services will be held on Wednesday, June 23 at 10:00 at New Life Nazarene Church in Miami, OK. Graveside services will be held at GAR Cemetery.

James Carter Howard (Jim) entered into eternity with his Lord and Savior on Friday, June 18, 2021 following a sudden illness. Jim was born on September 24, 1947 to the late Herbert Clarence Howard and Arta Irene Spielman. He was preceded in... View Obituary & Service Information

The family of James "Jim" Carter Howard created this Life Tributes page to make it easy to share your memories.

James Carter Howard (Jim) entered into eternity with his Lord...

Send flowers to the Howard family.