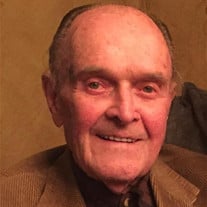 James E. “Jim” Buzzard of Miami, Oklahoma passed away on Sunday, December 22nd, 2019. He was 95 years old. Jim was born March 21st, 1924 at Seneca, Missouri to Marion & Delila Buzzard. He was five years old when his family moved to Oklahoma. During his lifetime he was involved in farming, ranching, banking, and insurance. He was also actively involved in engineering and construction of major cross-country natural gas pipelines and pipeline facilities within the continental United States, offshore Louisiana in the Gulf of Mexico, and across the Andes Mountains in South America. He was actively involved in construction of these facilities until he retired at the age of 85. He was a member of New Hope Christian Church in Miami. Jim loved his family and is survived by his wife Beverly Buzzard of the home, his daughter Shannon Huffman and her husband Steve of Miami, his son Derrel Buzzard of Miami, his daughter Alyssa Glenn and her husband Keith of Miami, his daughter Judy Tinney and her husband David of Tulsa, his son Doug Buzzard and his wife Karen of Hunter, Oklahoma, and his daughter Sherry Jackson and her late husband Bud of Tulsa. Surviving also are grandchildren Brady Huffman, Raygun Buzzard, Kyla Glenn, Shane Bowman, Brody Buzzard and his wife Kira, Mollie Treadway and her husband Vic, Micah Buzzard and his wife Jessica, Drew Jackson, Ben Jackson, and four great-grandchildren. Jim was preceded in passing by his parents, brothers Harold Buzzard, Dennis Buzzard, Bud Buzzard, and grandson Trey Huffman. Visitation will be held Friday, December 27th from 1:00-2:00 at New Hope Christian Church. Service will be held at 2:00 following the visitation with Ron Murphy officiating. Interment will follow at Old Olympus Cemetery in Grove, Oklahoma. Services are under the care of Brown-Winters Funeral Home and Cremation Service in Miami. Friends and family may send the family notes of encouragement by viewing Mr. Buzzard’s Tribute Page at www.brown-winters.com.

The family of James E. Buzzard created this Life Tributes page to make it easy to share your memories.

Send flowers to the Buzzard family.